- May 15, 2020
Dan Jon Jr turned 12 today and thanks to the lockdown and us not having spent as much money on takeaways, snacks, last-minute top-up shops and the like, we had a bit of spare cash and finding a bargain of a deal Dan Jon got a very expensive Birthday gift of an Oculus Quest. 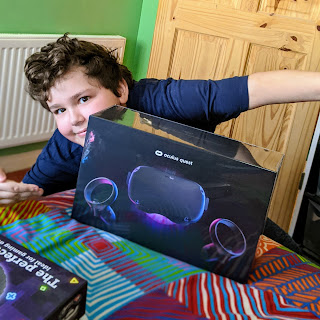 Luckily Dan Jon is fully aware that this is a one-off and that he won't be getting anything that expensive again (as a side note, it's made Flyfour and I look very carefully at how much we spend on snacks!) and is also very pleased that he is able to share it with the family a little too. I mean even I've had a go, it's very clever but I'm not sure I'll be spending a lot of time in a VR world!
Dan Jon is honestly so fantastic.
He is funny, like really deep down funny and nobody can make me laugh as much as he can, even if he does love terrible Dad jokes!
He's loving and kind. Not just to me but to his friends and family too and he loves being able to show people that he loves them.
He has such a fantastic mind, he retains facts and tidbits and brings them up at the most appropriate times and he has a fact for almost every moment too. He is also able to recite quotes and whole scenes from TV shows and films.
He is great with his Diabetes. Yes, we do need to remind him to change a cannula or to do a blood test every so often, but he understands when we have to make changes to what he is eating or when we have to do more blood tests or something. He's so great with it all, a lot better than I would be!
He is intelligent but doesn't gloat about it or rub it in if he knows something and someone else doesn't, (well unless it is about a computer game, then he is terrible!) and loves to show us what he has learnt or to show us things that he thinks might interest us.
He is not afraid to show his emotions or to stand up for himself if needed. He's brave and righteous (a little too righteous at times!) and willing to try almost everything once!
Happy Birthday Dan Jon, may this next year be as fabulous as you are.
Birthdays Family Life