Sunrise And The Love Of God

- May 31, 2020
A few nights back, Dan Jon's blood sugars decided to have a little party. They couldn't decide if they were up or down, and when they went down, for some unknown reason they decided to stay down for extended periods of time, meaning every thirty minutes or so I was woken up by the Klaxon on my phone alerting me to the fact that Dan Jon's blood sugars had dropped. I would trundle to his bedroom, still half asleep, to test his blood sugars whilst he, and the rest of the house, slept contentedly through the beeps of our phones.

By three am, I was very sleepy and whilst I wasn't jealous of Dan Jon's ability to sleep through the prodding and beeping, I was starting to resent that I wasn't in my bed sleeping soundly. Then around 4:30am, whilst I was waiting for Dan Jon to chew up some quick release sugar tablets, I realised that through the crack in his curtains I could see the start of a beautiful sunrise. 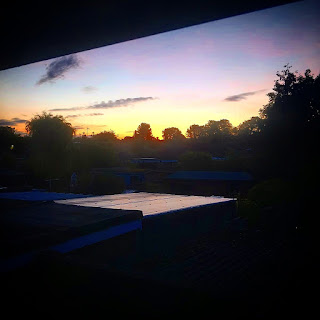 Dan Jon had already turned over and was breathing the way that sleepers do, so I grabbed his phone and snapped the above photograph, not wanting to return to my bedroom to pick up mine and miss the beautiful sky outside his window for one second. I knew that Sunrise wasn't for another half hour or so, but suddenly my tiredness and creeping feelings of resentment was gone. I sat in Dan Jon's room for the next twenty minutes, watching as the colour slowly crept higher into the sky, waiting for his sugars to rise and marvelling at the beauty before me, before returning to bed listening to the birds singing their greeting to the sun.

Later that morning, whilst the children still slept, Flyfour had gone to work and the washing machine was going with its first load of the day, I was sat in the living room reading my Scriptures. I'd randomly picked a page after a prayer, looking for some inspiration and I found it. In fact I had to go back and read a couple of verses a couple of times as they were perfect. It was in Lamentations, chapter three, verses 22-23 that I found my inspiration for the day.

It is of the Lord’s mercies that we are not consumed, because his compassions fail not.
They are new every morning: great is thy faithfulness.

For those who don't speak Old English, the way I interpret the passage is that God has a great love for us, which is renewed every day (well every second of every day really) so we are not going to use up the goodwill he has for us, we aren't going to stop him from loving us. All we need to do is have faith that he will continue loving us and he will.

I had felt a little like a candle, being burnt at both ends, not just because of the lack of sleep I'd had, but because of the expectations I put upon myself, the worries I have about the world returning to normal when reading those verses made me realise, I wasn't going to be used up by these worries, God wouldn't let it happen because he loves me and all I need to do is give my worries to him and he'll look after them for me.

The rest of the day passed happily, I did the chores I needed to do, and some I didn't but wanted to. I played and read and drew and spent time in the sun knowing that God was also smiling down upon me.
Diabetes Family Life Life Lessons Religion Summer