A Burned arm and a bandaged Frog

- July 09, 2010
When we went to the lovely John Lewis event Baby Boy accidentally burned his arm on a light that was up-lighting a display. It wasn't anyone's fault, nobody was to blame it was just one of those things. By the time we were on the train home there were some blisters forming and his arm had gone bright red around the burnt area.

Baby Boy was asleep in the pram, so I cooled down the area and called Daddy, because I knew that there was something that I was supposed to do but just could remember what it was. Even Daddy couldn't remember and so lovely NHS Direct came to the rescue. We were advised to go to our Doctors to see a Practice Nurse, but as we couldn't get an appointment until just before the end of surgery we opted to go to the local walk in centre.

I have used the walk in centre a few times in the past and know it can be busy, but we had been told on the phone that there wasn't many people about and so it was a good time to visit. We waited for about three minutes to be seen by a Nurse who then applied a special bandage to Baby Boys arm, after checking it over.

Baby Boy didn't like the bandage being put on and shouted;

so much so that a second Nurse stuck her head round the door, just to check what was going on! 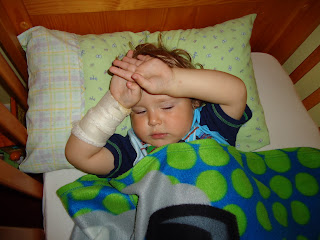 We decided that what we would need to do was to all have a bandage on so that Baby Boy would leave his bandage alone. We went and got Baby Boys favourite cuddly toy Freddie the Frog who Baby Boy decided didn't need a bandage on his arm, but actually all over his head. 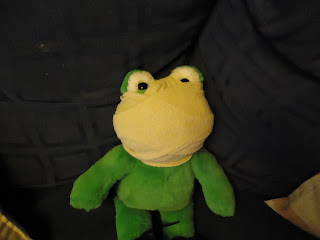