The Octopus who came to tea

- July 22, 2010
Every so often Daddy and I like to try something different. It might be that we take a walk down the World Foods aisle in one of our local Supermarkets (We have one of all of them nearby!) or it might be that one of us finds a recipe that we decide to try out, without the other one of us knowing what it is that we are preparing.

It was whilst we were walking down an ordinary aisle that Daddy found a can of something that neither of us had actually eaten before and we decided to be brave and try... Octopus! 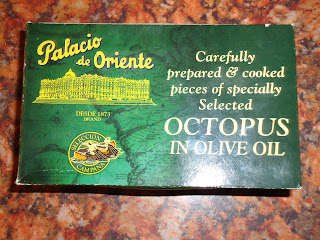 Now the package itself looks fairly harmless as you can see. 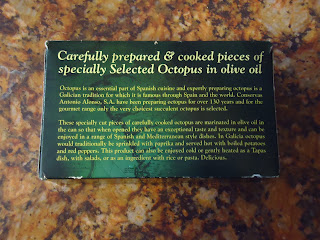 But when you open it up, this is what you are presented with. Yes, those are suckers on a tentacle in the bottom right of the can. 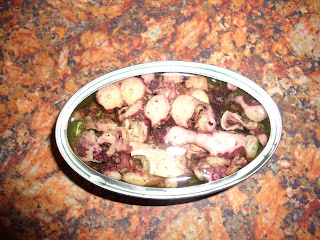 So I served it up, reserving two small parts for Top Ender and Baby Boy so they could at least pretend to try and a larger portion for Daddy and I. We served it with Red Peppers, Salad and New Potatoes (It said it was nice like that on the packaging) and all of us were ready to give it a go. 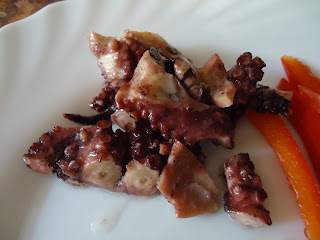 What was the verdict? Why not watch Daddy take his first mouthful?


Well as Daddy says it was fishy, I felt it was quite strong, Baby Boy decided that it was yuck and spat it out on to my leg and Top Ender took a sniff, a lick and then refused to sit anywhere near me in case I snuck some on to her plate!

I was surprised though because Daddy, not normally one to try new foods, not only suggested that we get this to try but then also liked it! Wonder if I can get him to suggest eating some new Vegetables...
Family Life Food