The Three Trees in my Garden

- July 23, 2010
There are trees in my back garden. There is a tree that has been here since before the house was built and three trees along my fence border. Someone who owned my house in the past must of planted them, I have tried my best to look after them since we moved in and took ownership of them.

The tree nearest the Kitchen window is an Apple tree. The Apple tree is fantastic and I knew that it was an Apple tree because I recognised the fruit. Yes, that's right it bears fruit. I have made Baby food, Apple sauce and Apple Crumble with the apples that my tree has grown. There are still some Apple Sauce ice-cubes in my freezer from last season which I fish out whenever we have Pork. 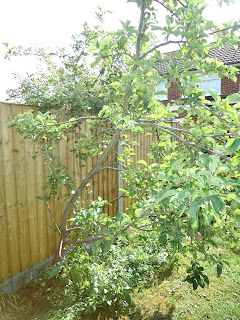 There is a Damson tree too. Its furthest away from the Kitchen window and I wasn't sure what it was when it first started producing fruit, because the damsons are the greeny yellow that some damsons can be. I recognised the tart taste of the fruit when it matured and so was able to appear quite smart to Top Ender and Baby Boy and of course my adoring husband. This year I might attempt to make Jam from them rather than adding them to crumbles as I did last year. 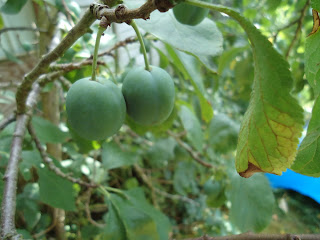 There used to be a Grapevine, but that snapped in the heavy wind not long after Baby Boy was born. It was a shame as I was looking forward to making Non-Alcoholic Wine or Grape Juice. I might have to make some with the blackberries that creep along our fence, or then again seeing as a handful of blackberries thrown into the Apple Crumble is nice maybe I won't. 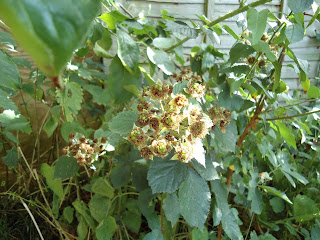 The Third tree is in the middle of the two fruit trees and is the tallest of them all. From my Kitchen window I can see the apple tree and this other tree quite clearly. It was whilst I was doing the dishes that I noticed something different about this third tree.

It had a big brown leaf.

Turns out though its not a big brown leaf. Its a pear. 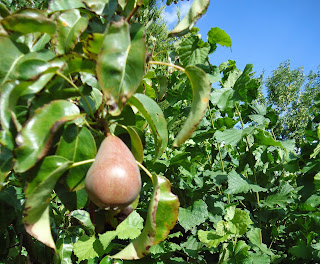 I am a little excited about my three fruit trees. Its making me think about what else I can plant to grown that requires little or no help from me... any suggestions?
Family Life