- July 05, 2010
So I didn't win a Gurgle. I know, I was robbed. Luckily I was robbed by the very lovely and very funny Hot Cross Mum but the only reason she won was because the judges (Nifa and Tor and Myleene) all had alpha spaghetti for tea the night before they did the judging and so it was some form of subliminal messaging going on.*

I had a very nice time though, mainly due to these lovely people (that's Leanne from Second Time Mummy and her very lovely fiancé) who thought I was charming and funny and not at all stalkerish or nosey! Which is lucky because that is what I was aiming for (the charming and funny not the stalker and nosey) and I really hope that I get to meet them again. In fact I hope that everyone gets to meet them, so follow Leanne's blog and they might invite me round or name their baby after me. Either one is fine by me. 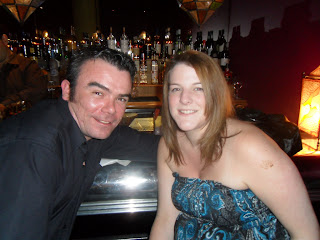 I also had a few Virgin Watermelon coolers, which are going to be requested at every bar I go to from now on. And of course I had the most fantastic time walking through Soho and seeing all the fantastic sights that the Gay Pride March had on display... no really they were you know on display.

I was kept amused by Jo from Single Slummy Mummy who I had managed to get a taxi with to Soho. Jo told me stories in the Taxi and gave her business card to a policeman and told him to read her blog. I was more reserved and only asked if he was single because Jo is single and I thought that she might like a man in Uniform. He had a partner though.

Apparently I don't have gaydar.

The giant wooden pussy cat in the lobby of the Hotel also amused me. I wanted to take my photo with it, but I thought that might just be pushing it a bit too far in a posh hotel.

So Thank you Gurgle for having me and feeding me Watermelon coolers and for thinking that I was vivacious and funny.

*This may not be true, but it makes me feel better so lets just pretend that it is.
Blogging