- August 24, 2010
When I went to Asda House last Wednesday I didn't know all I do now. You know how sometimes you learn about something after the event and you kick yourself? Well the first thing I would kick myself about is the live webcam that Asda House has in its Atrium. If I had known I would of taken a sign with me and told everyone on Twitter that follows me to watch at a certain time. If they ever forgive me for all the giggling that took place then next time I am invited back (please have me back Asda!) I promise to behave... apart from the sign I will be carrying! 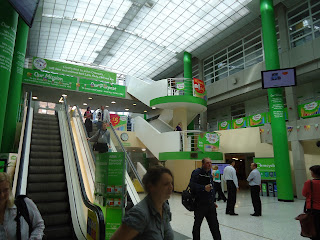 I learnt a lot about how Asda works, and was fascinated by the culture that they have. When you work at Asda, it seems that you aren't just working at a job, but you are part of the family. I can't speak for all the employees, but I do think that everyone that I spoke to loved their job. They all had such enthusiasm for what they do and for each other and for the other departments! There is of course a friendly rivalry between departments, but that actually benefits customers as each department is striving to bring better goods and service than other departments. Its like a win win for the employees and customers!

I was really lucky to be able to talk to buyers in both the World Foods Department and in the FreeFrom Department. Paul (World Foods) and Richard (FreeFrom) were both keen to know what we (I was with CosmicGirlie as Amy from And one more means Four......and 1 more, Him Up North from The Blog Up North and Maria from Mummy's Busy World went to other departments) thought of the ranges that they had in store and what we thought was missing. I had a great chat with Paul, he is one of my heroes because he is part of the reason that Daddy and I choose a new food every once in a while to try!

Richard was amazing. He sat there and made notes whilst I made a huge list of everything that I thought was missing from the FreeFrom range, and everything I would like, that annoyed me and I would like more of. Then he gave me a huge bag of food to bring home for Daddy to eat (Thanks Richard, From Daddy!) and to give feedback on. The products were great and were very diverse and Daddy will talk about them (and also give his other great buys from all the major supermarkets in the UK) as soon as I can sit him still long enough with out him looking up his American Dream! 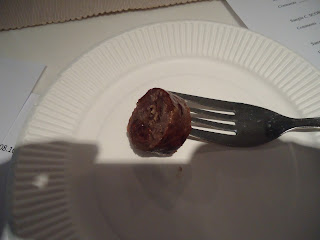 Whilst we were at Asda House, we were allowed to try and give our opinions on several customer inspired sausages, one of which will be announced as the winner in the next few weeks. The Sausages were expertly cooked and none of us tried to convince the chef that he should come home with us, and none of us tried to get the chap in charge of Bacon and Sausages to let us tag along with him the next time he was product testing, and none of us made any crude jokes about hot sausage, meat, or injections of hot beef... and anyone who says otherwise is out to get me!

Finding out some of the history of Asda wasn't as boring as you might think because the wonderful Mike and Owen truly love the stores and it came across in what they told us; Both have worked in Asda for an impressively long time and both were able to give us facts (like Asda was the first Supermarket to sell Furniture!) off the top of their heads and they were aware of every store! When I said that my local was Milton Keynes, they both nodded and said "SuperCentre". It had been joked that both Owen and Mike would bleed green or if you cut them in half would say Asda through the middle of them, but I really do think that it is true! I have also said if they are ever in the MK area they can pop in for a cup of tea and I really do mean it, they were both great fun!