- August 13, 2010
Many years ago when Daddy and I had been married for almost a year, and we watched BBC News in the mornings before work (instead of cartoons as we do now) there was a segment on the Perseid meteor shower that was going to happen that night. Daddy foolishly agreed that at the best time to see them (which was at silly O'Clock at night) we would drive out of Milton Keynes and all the ambient light to the nearby countryside to watch the shower. 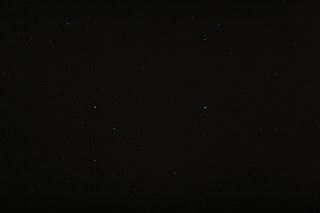 We wrapped up warm and drove the short distance to the countryside where there was no streetlights and we could see the stars almost perfectly. We stayed there for about a half an hour looking for meteors and seeing nothing. It was a clear sky, there was no extra light and yet we had failed. We didn't care though, because we had been together.

As soon as we got back to our flat, with the lit parking area and the ambient light that fills Milton Keynes we saw them. Hundreds of them rushing across the sky. So much for wanting to be away from Ambient light. Every year since we have only gone as far as our back door to watch the Meteor Showers. Last night Daddy was putting on his coat just before 11pm, looking at him with a puzzled expression he told me that tonight was the night of the Annual Meteor shower. I hurriedly sent a Tweet and then joined him outside.

Within seconds we saw our first Meteor, and then another and another and then the biggest one that put the others to shame. I quickly hurried inside to wake up Top Ender so she could watch with us (I'm no fool I didn't even think about waking up Baby Boy!) and she came down with us and together we looked at the night sky. It seems that Top Ender was a bad luck charm though as soon as she came out there were no meteors to be seen and as soon as she went back to bed they started again! Poor Top Ender...

If you fancy having a look then try again tonight, look towards the Perseus constellation, but maybe consider getting some form of neck support!
Family Life Free Days Out