- August 12, 2010
Last weekend we were lucky enough to be invited to the Film Premier of Disney’s TinkerBell and the Great Fairy Rescue being held at the Mayfair in London. The whole family is a BIG fan of anything Disney and Top Ender loves the Disney Fairies and everything to do with Pixie Hollow! Having already seen the first two films and owning them on DVD, we knew that we were going to be in for a good time and couldn't wait to watch the film. 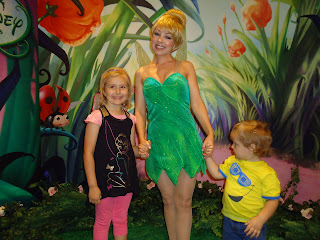 As soon as the film started Baby Boy sat in his chair with a big grin on his face and kept calling out "Cool!" as he would quite like to be a fairy or Peter Pan, (he isn't sure which is better yet). Top Ender was able to keep her squeals of excitement a lot quieter especially as she had heard that the voice of Lizzy was in the audience and didn't want to appear to be uncool!

I really don't want to give too much away about the film, as it was so fun but I can confirm that this is the first time that the Fairy world and the world of humans mix and it is just as magical as you would expect! There is a bit of mild peril but Baby Boy wasn't that bothered by it (I was more worried than he was!) as I think that he knew everything would work out in the end! This is the official trailer of the film, if you want to take a sneaky peek!


After the film I was talking with Baby Boy and Nell McAndrew's son Devon about the film and both of them said they had enjoyed the film. Top Ender had of course loved the film and hoped that she could meet a fairy and has resolved to leave drawings everywhere so that Fairies know that she is a believer!

We were lucky enough to get a few minutes to speak with Lauren Mote, who is the 13 year old actress who lends her voice to Lizzy in TinkerBell and The Great Fairy Rescue. Lauren goes to Sylvia Young Theatre School in London and was really sweet; I hope that she is a big star in the future as she certainly deserves to be! 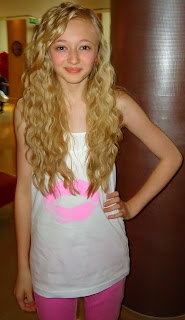 To share with you the fantastic world of Disney's TinkerBell, we have the first TinkerBell DVD along with a TinkerBell Fairy figure in a competition for those of you in the United Kingdom! To enter you need to answer the following question, the answer to which can be found somewhere in this blog post.

What fashion item did both Lauren Mote and Top Ender wear to the Disney premier of TinkerBell and The Great Fairy Rescue? (Hint look in the photos!)

Please leave your answer in the comments on this post; it is limited to one entry per household and to those in the UK. If more than one answer is correct then the correct answers will be assigned numbers and a random number generator will choose who wins. The competition is open until 1pm on the 15th August and I will email the winner to get contact details, so please make sure your email address is correct when entering!
Film Review