- August 02, 2010
It isn't just me who comes up with places and ideas of where we should go as a family, Daddy comes up with ideas too and this past weekend when we went to the Croydon Summer Festival it was his suggestion. 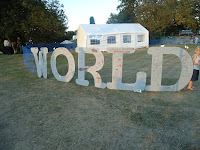 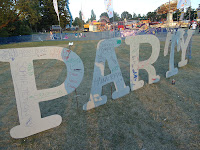 We went to the World Party day (well evening) as we wanted to hear Martha Reeves and the Vandellas but due to some issues with traffic and roads being closed and a lot of police guarding crime scenes we arrived after they had left the stage.

As we came in we saw this sign, I am not sure who brings a kangaroo to a festival, but we were pleased that they were very clear about what sorts of Animals weren't allowed into the grounds! If anyone has ever taken any form of Marsupial to a Musical Festival, if they could let me know in the comments that would be great.

We had a quick look around the stalls and exhibitions (and of course the fun fair) and saw a fantastic sky dancer/air ballerina who was attached to a giant ball (and two men on the floor making sure she didn't fly away) and the movements that she made in the air were fantastic, and only a little scary as she would rush towards the crowds before suddenly swooping back into the air! 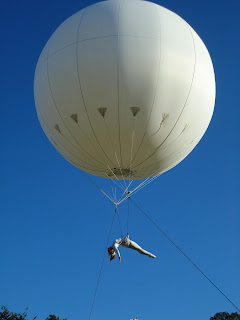 We managed to get back to the main stage in time to hear the other act that we wanted to hear... The Lightning Seeds! Honestly this photo does show Ian Broudie on stage...

We set up camp nearish the back of the crowd and both Top Ender and Baby Boy were having a great time having a dance to the songs (which I knew more than I thought I would) and even got me dancing although there is no video footage of this phenomena! It was a beautiful end to a beautiful day and I think that I could be tempted to go to every London borough Summer Festival!
Family Life Free Days Out