- August 26, 2010
Last week Nutella invited me and the rest of the family to breakfast at Legoland (I'll talk about the park in another post!). When I told Top Ender, it was like all her Christmases had come at once; Nutella spread and Legoland? Then the Nutella people were kind enough to send us a jar of Nutella and a big box of bread (Not just any bread though it was Hobbs House Bakery Bread) and it was open season in our kitchen with Top Ender thinking up new and exotic ways to eat Nutella. 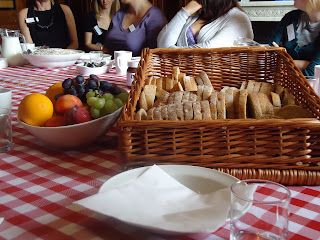 One of our favourite snacks at home is breadsticks with Nutella as a dip (like those snacks you use to get when I was little), and we had been promised as well as a chat with a nutritionist and a Psychologist that we would be shown some fantastic ideas of how to use Nutella in recipes too. I was excited, and sitting next to Emma from Me The Man and The Baby and Vic from Glowstars and a lady with fab shoes from Nutella.

The Psycologist was Karen Pine who is a Psychology Professor at the University of Hertfordshire (and she gave so much information that I could do an entire blog post on what she said alone!) and one of the things that she said that really stayed with me was that a parent would have to give a new food on average between 10 and 15 times before it would be accepted. This is something that we do already do in our house as my Mum never stopped giving me vegetables that I didn't like, always hoping that I would change my mind and nine times out of ten I did. I even eat Brussels Sprouts. 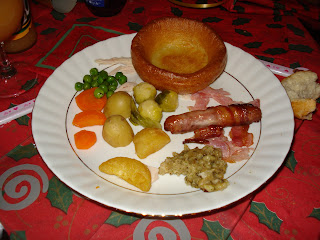 Karen had also said that children eat foods by example, so just as if a child sees you reading they will be more inclined to pick up a book if you are eating your vegetables then they will be more accepting to eat their vegetables! Again this is something that we do in our house, when Daddy and I were thinking of having children; I made him promise that he would always eat his vegetables in front of the children even if he didn't like them!

The nutritionist was Sian and she was able to talk about the balanced diets that we should be following and portion control. Children's stomachs when relaxed are about the size of their clinched fist. This does expand as they eat, but you should remember that food for children whilst not necessary needed in huge quantities does need to be given in the right calorific amounts!

Lastly we went through to another room and made some food with Alan Coxton. What this man didn't tell us would have fitted on a postage stamp; he was able to keep us all entertained with his cooking and facts about various foodstuffs! He really got across that there are dozens of things to do with Nutella; it might be that you add Nutella to porridge, have Nutella on toast, add Nutella to smoothies (recipe below), use Nutella as a dip or just dip your finger in the jar if you are feeling naughty!

Nutella were kind enough to give us a few recipes which are going to be on their new website, (which goes live on the 1st September 2010) and here is one which both Top Ender and I have been enjoying slurping! 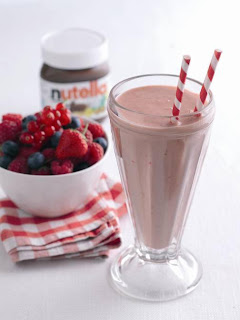 1. Put all ingredients in a blender or put into bowl if using hand held blender and purée for 2 minutes or until smooth.
2. Pour into glasses. Garnish with fresh berries.
Tip: experiment with different fruit such as an exotic mix or mixed berries

I going to give some of the other recipes a bash and try to come up with my own recipes with Top Ender and Baby Boy (and Daddy if he is lucky!) and will report back... possibly with a keyboard full of crumbs!
Drinks Family Life Recipe Snacks