- August 01, 2010
On Saturday, Daddy and I took Top Ender and Baby Boy to London to see "The Go! Go! Go! Show", (after having been given tickets by Mummy Marketing) which is a family musical about a group of five friends and without giving too much away involved a sweet sock-stealing "Fluffalope", magic bikes and some fantastic songs that none of us have been able to stop singing... 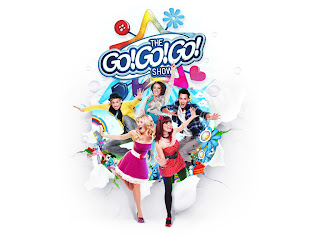 We went on the underground to Leicester Square (which is on the Northern and Piccadilly line) and then walked round to the Leicester Square Theatre (its hidden up near the Prince Charles Cinema near China Town) for the 2:30pm show. We made our way down the stairs and found a foyer with a very friendly man selling merchandise which was very reasonably priced and saw me buying Top Ender and Baby Boy flashing wands (£3 each) and a Souvenir programme pack (£5), there was a place to leave our buggy and a huge pile of booster seats for children to use in the intimate theatre.

We were all quite excited to find that over the back of our seats were different coloured socks (which becomes important later) and we settled down ready for the show. From the start Baby Boy and Top Ender were excited and as soon as the musical started they were dancing along and learning the Go!Go!Go! club move and shouting excitedly when ever the cast asked the audience a question. Top Ender was in heaven and laughed loudly at the jokes, as only a six (and a half) year old can, and has already learnt all the words to Heaven Bound. Any doubt that I had about us not enjoying the show was removed from my mind as we all grew more and more engrossed in the show.

There is an interval in the show, and if you are tempted to buy an intermission icecream do be warned that they are £2 per tub, but it was really nice ice-cream and according to the pot they have won lots of awards for being so nice.

The second half of the show started getting a bit too much for Baby Boy, but with some clever Mummy and Daddy tricks we managed to get him to watch most of the second half, without too much stress and we decided that he would skip meeting the cast after the show and go and claim our buggy. Whilst he and Daddy were claiming the buggy they did meet Mr Baffled who was very charming according to Daddy.

Top Ender and I battled it out to meet the other cast members (nearly losing an eye in the process from some sharp elbowed mothers) and even though they had just finished a show and must of been exhausted they were all so lovely and I hope that take this show on tour... or at least release a DVD as all of them deserve success in the future.


For further details of show times and how to book tickets, visit http://www.gogogo.tv/ and do it soon, it is one show that the whole family really will enjoy!

When we were offered our tickets, we were also offered tickets for a family of four as part of a competition and so if you would like to win tickets to see ‘The Go!Go!Go! Show’ then all you have to do is answer this question;

What is the name of the sock stealing creature in The Go! Go! Go! Show?

A. The Sock Nabber
B. The Fluffalope
C. The Sneak

Please leave your answer in the comments below (on A Mothers Ramblings, not on any other feed such as the Facebook group), and use a valid email address as this is how I will contact you if you have won. If more than one answer is correct, a random number generator will be used to choose the winner, based on the order of entry. Competition closes at 1pm on the 7th of August, transport is not included.
Review