Robinsons Search for a Star - Coming to a Theatre near you!

- August 05, 2010
Top Ender loved the Panto last year that we saw (Cinderella at Milton Keynes Theatre) and loved putting on her own Pantos (with the Robinsons Put on a Panto website) and so when she realised that this year she was old enough to audition for the local Panto she was very excited. I was even more excited because not only is Joanna Page in the Panto this year, but so is Stavros Flatley and Luke Perry! Of course we signed her up as soon as we were able to.

I don't think it was a coincidence but more of a stroke of luck that we were invited down to meet Joanna Page at the launch of the Robinsons Search for a Star in Milton Keynes, and Top Ender although not quite realising who Joanna was at the time did recognise Dick Whittington (A beautiful Jenna Brook) and Sarah (A handsome David Chambers and if your reading this David let me know your website and I will link to you too!) as characters from Panto. 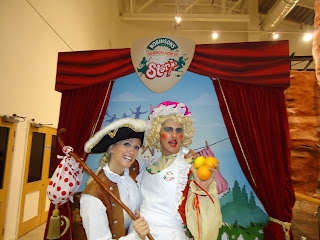 If you don't know me in real life feel free to skip this next paragraph and for those of you who do know me in real life his name really was DC and I did kind of shout out disbelievingly "Your joking!" before explaining why I shouted that at him. It wasn't really *our* DC though was it? Someone saw him yesterday afternoon at the end of day right? 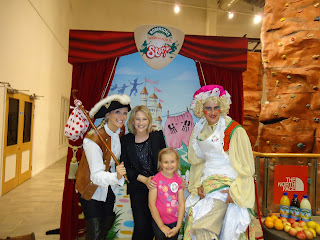 Joanna was so sweet and took the time to speak to Top Ender and I (Baby Boy had fallen asleep) on several occasions even though there were the local newspapers and local TV Stations there (and they were probably much more important for coverage than me) and even started having a discussion about Glee with Top Ender and after a quick rendition of Journey's Don’t Stop Believin’ by Top Ender told her that she hoped that she would audition for the Panto. Top Ender was of course ecstatic and is now really looking forward to the auditions in early September!

This compliment meant that Top Ender thought it was only fair to warn Joanna that "Sarah isn't really a girl, but a boy wearing girls clothes and that boy is really a girl dressed up!" which Joanna displayed great mock surprise at and said something about keeping an eye on them for Top Ender!


Now Top Ender has already made me log on to the Robinsons Search For a Star website and register her for one of the 400 audition spots in Milton Keynes (there are now 399 left people!) and if you think that your children might like a chance and they are aged between 6 and 16 then hurry along and see if a Panto near you is taking part (As far as I can tell the 12 areas which are taking part are; Aylesbury, Glasgow, Brighton, Bristol, Bromley, Liverpool, Manchester, Milton Keynes, Richmond, Stoke on Trent, Wimbledon and Woking) and register quickly!

Of course we will keep you fully updated with the Audition process, but if you could all let Top Ender know that you are supporting her and keeping your fingers crossed and saying things like "Break a leg" then I would be really really grateful!
Family Life