- September 08, 2011
Making the bed is a chore that like cleaning the bathroom is so simple that I don't mind doing it, which is probably a good thing seeing as I make my bed every day! The everyday making of the bed is something which for beds in this house just involves a flick of the duvet and repositioning of the pillows and toys or cushions that sit on the bed. We don't do blankets, turn downs or anything like that as we are simple creatures really. We start off with a bit of fun by having the child who is making the bed or who is at home laying in the bed. Then flipping the cover in the air so that it wafts down on to the top of them. We do that a few times (it's always fun to have a duvet land on top of you!) before Top Ender or Big Boy has to quickly scramble out of the bed so that the duvet cover will land nicely over the mattress.
Watching Top Ender or Big Boy then loving place back on to their bed the teddies and cushions that they like to keep on their bed in the day is so sweet. They like to help with my bed too, although I am not sure if that is because they want a double bed each or they just like helping out! 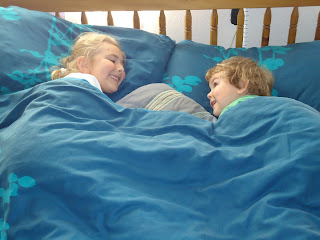 It's such a silly thing to do, but is such a giggle that making the bed every morning becomes less of a chore and more game like everyday.

Taking off the sheets for putting on new ones is something that we have turned into a race or for variety a game of tug of war! If we are playing tug of war one of us has to hold the duvet or pillows and the other holds the duvet cover or pillow cases. Then we just have to both PULL! Just make sure that it is a little pull or you could find someone falling on to their bottom... Making a race of taking all the sheets off the bed has meant that both Top Ender and Big Boy could do it without any adult assistance, and as well as making the chores fun, teaching them how to do the chores too!

Putting on new sheets (or clean sheets as I sometimes leave the bed unmade for a few hours until the sheets in the wash are clean and dry) is something I used to hate. It would always be a struggle to get the duvet into the duvet cover, and then I would get stuck if I went into the duvet cover to straighten out the duvet. Now though with the help of Top Ender or Big Boy and (and sometimes both!) it is a game and easier. 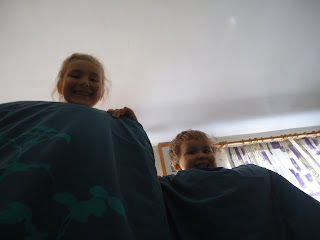 An one last tip as I could never flip the mattress over without wondering if I was turning it the way it had been flipped last time, I numbered the corners of the mattress. Now I know just to make sure that the next highest number is in the bottom corner!
Chores