- September 07, 2011
As I mentioned the other day, after I went to the Disney round table about the Ultimate Packed Lunch, Top Ender and I agreed that on special days, holidays and Fridays I will create a special packed lunch for her to eat at school. If you have been following me on Pinterest you will have seen a fair few pins being put up of ideas to inspire me for these lunches. With today being Tops first day back at School I figured that we needed a special lunch to celebrate and also to mark our commitment to this new Friday oekakiben inspired lunches.

I thought I would ease myself in slowly and so started with Top Ender's morning snack. At the school Top Ender attends children in the Key Stage 1 years are provided with a morning snack of some form of vegetable or fruit. I actually found this to be a pain as we weren't told in advance what the snack was and so on some days Tops ended up eating the same fruit or vegetable as she had for her morning snack as part of her lunch too. Now that she is in year three I get to provide her with a morning snack so I get to be a bit creative with that too! Today Top Ender has a butterfly Clementine and some cucumber pieces which she insisted I add at the last minute so I didn't have time to do anything other than just slice! I really like the butterfly Clementine and so will develop this idea over the next few weeks I am sure. 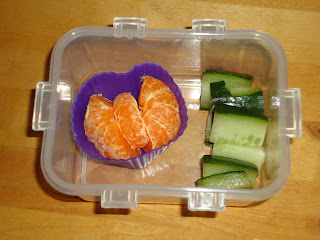 Top Ender had a project to complete over the summer to prepare her for the work she would be doing in year three. The theme for the term and her project was Sea creatures and so her sandwich had to be a fish, which you may have already seen if you were on Facebook last night. The sandwich is a ham and cucumber sandwich (there goes my rule for not doubling up on fruit and veg!) with a few pasta pieces from last nights dinner making the sea bed. You can't see it but the triangles that were cut out of the fish are actually underneath so Tops still has a full sandwich to eat, the only thing not in the sandwich is the crusts and the small piece I cut out of the mouth (I had to try it didn't I!). The green seaweed is actually chives, which tops will add to her sandwich, after she has finished looking at it! 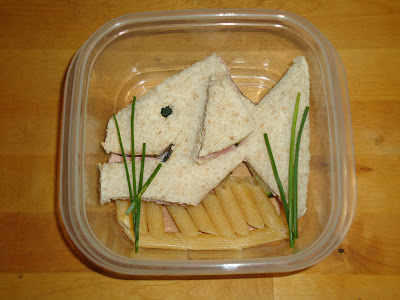 A sandwich doesn't make a lunch though and so I added some vegetables to her lunch by creating some carrot starfish, and they were rather crunchy and lovely (I made a few too many so *had* to eat them myself). One thing that is really important to remember when making up a packed lunch is to not pack more food than can be eaten in the time allowed, and too big a portion. The five carrot starfish make up one of Top Ender's fists, so I know that this is roughly the right sized portion for her. 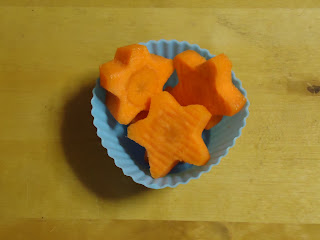 No lunch box would be complete without a bit of cake and so a Carrot, Apple and Sultana Muffin slice was taken from the freezer and added with a drink and a yoghurt to her first day back lunch box. So far Top Ender hasn't seen her lunch box and I really hope that come lunch time she enjoys her first day back at school surprise lunch!