- June 10, 2013
One of the things that I appear to be known for these days, are the lunches that I make for Tops and Big Boy and occasionally for Daddy and myself. So, it probably isn't a surprise that when we have a picnic, we kind of go all out with the different foods that we take. Big Boy and Top Ender are very certain of what types of food should be included in a picnic, as am I and when I was asked to celebrate National Picnic Week (17th-23rd June 2013) by the Unilever Kitchen by creating a recipe using products from their brands I knew what it was that I wanted to make. The only problem was I had the additional restriction of only using the foods that I had in my kitchen as I had already spent my food budget for the week. 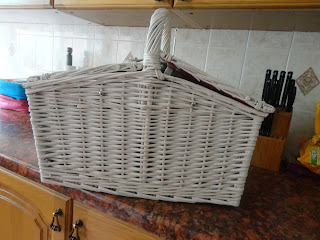 After everyone had a good look into the hamper that Unilever sent, stuffed full of their products my family left me to it, knowing that I'd create something they'd love to eat. Apart from the pictures here, you can see some more in our Facebook album as in the end I didn't just create one dish, but ended up using almost all the products that they sent in a variety of dishes and because I know you'll love them for your picnics and packed lunches here are all the recipes for you.


This is so simple, I peeled and cubed potatoes before boiling them, draining them and leaving to cool whilst I made some other dishes. I couldn't tell you how much in weight I used as I just peeled what we had leftover from the weekend. Once the potatoes were cool, I added two dollops of Hellmann's Mayonnaise and ran out into the garden to grab some chives which when snipped into small pieces and sprinkled into the potato and mayonnaise mix. 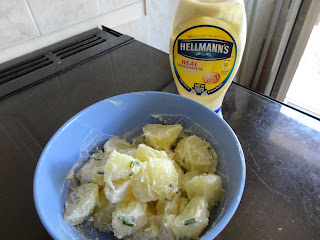 I thought that the Children would eat this, but they turned their noses up and so if I were making it again, I'd also had a tablespoon of Mustard to give it a little more of a kick as it's what my Mum used to do.


When I drained the potatoes for the potato salad, I realised I had peeled a few too many and so reserved half to throw in the oven. I peeled a red onion and along with some cherry tomatoes added them all to a roasting tin with some Olive Oil where, I seasoned them with garlic granules and roasted. I suggested that this should be eaten along with Hellmann's Mayonnaise with a touch of Garlic, which Daddy and Top Ender heartily agreed with. 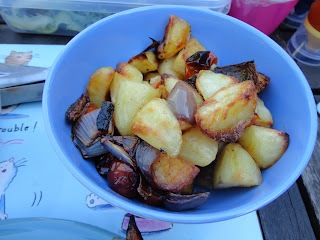 
I sliced and fried some mushrooms, which I mixed into a dollop of Hellmann's Mayonnaise with a touch of Garlic and that was it. The mushrooms were delicious and whilst maybe not totally suitable for a picnic, they'd be great for a burger or hot dog topping at a BBQ.


I took 225g of Salmon and along with a half red chilli and Soy Sauce I whizzed in my food processor to make a paste. I then used a spoon to make 6 fish cakes which I gently fried in oil. These were served with a dipping sauce made by mixing Hellmann's Mayonnaise with a spark of Chilli with a drop of soy sauce (to own taste really) and a teaspoon of Coriander paste. 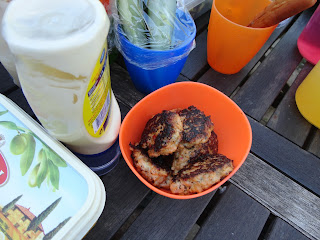 
I coated a piece of Salmon in Sweet Chilli Mango Sauce and baked in the oven for twenty minutes. I then sliced the Salmon into five pieces and drizzled the remaining sauce over the Salmon pieces before serving cold. I think that this would have worked better with Prawns, but I didn't have any and I'll know for next time! 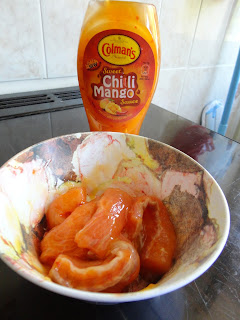 
I chopped up four spring onions and mixed it with some Hellmann's Mayonnaise with a spark of Chilli. I then marinated this for a few hours in the fridge before grilling. I was expecting this to be quite spicy, but seeing as Top Ender consumed most of them and she hates spicy food, I knew that they weren't! They were nicely flavoured, just not a hit the back of your throat kind of flavour. 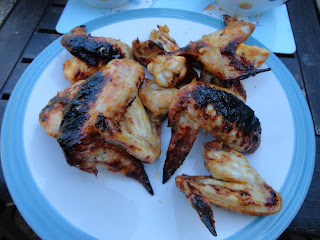 
This was by far the easiest dish. I cut up a Chicken Breast into bite sized cubes and then added a good squeeze of BBQ sauce. I left the chicken to marinate and then quickly dry fried the chicken in my wok before serving. Top Ender thought this was quite like the Sticky BBQ Chicken burgers I had made a few weeks ago, but it was a lot simpler and quicker to make. 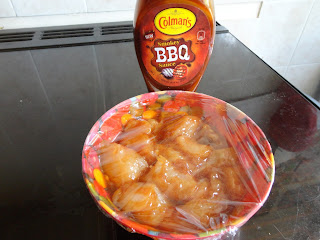 
I cut cucumber, celery and carrots into thin sticks which I made a Honey Mustard dip to go with by mixing some Colman's Mustard with Hellmann's mayonnaise and runny honey. I had intended it to be a dip, but I ended up putting it over my salad, which was delicious!


Using a vegetable peeler I thinly sliced an aubergine and a large carrot into  strips, which I seasoned with salt, and pepper before baking in the oven at gas 7 for 40 minutes, before turning them and cooking for a further 15 minutes. I let the crisps cool before seasoning again with more salt and pepper and served with the vegetable sticks as detailed above. 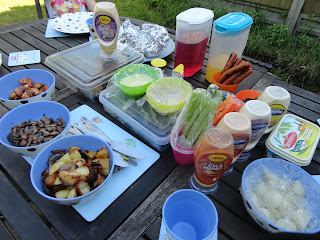 The biggest success of the night was the BBQ Chicken, which Top Ender and Daddy gave top marks to (and then the Spicy Chicken Wings) and Daddy loved the Chilli Salmon Fishcakes and the Garlic Roasted Potatoes. I really liked the honey mustard dip and the potato salad, but it has to be said that the various Mayonnaise's are the real winners of the evening as they are all so simple to use, although I'm discovering hundreds of ways to use Mustard.

If you fancy having a look at what we're eating pretty much as we eat it, then you need to be following me on Instagram and give our Facebook page a like... or of course manage to get yourself invited round to my house for lunch or dinner!

I was sent a hamper with products in, to create a recipe or rather several as it turns out.