- February 03, 2015
I've been lucky enough, to be asked back to being a Bostik Blogger this year and when our first box arrived I had planned to make some Chinese New Year Goodies with the children. Luckily Bostik had thought along the same lines and had sent plenty of gold and red goodies across. This is good because red represents good fortune and gold/yellow is the centre, and an important colour for a whole host of reasons. 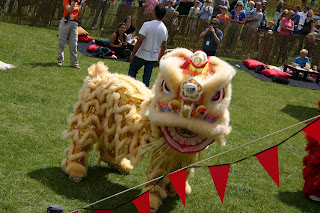 So we were also given some glue dots (I love glue dots) and foam pads to play with. What would we make? Well I asked the children and after a discussion of how it was going to be the year of the Sheep, the same as when Top Ender and I were born we knew that we had to make a sheep and a Dragon! Big Boy started on the Sheep whilst Top Ender started on the Dragon.

For the Sheep Big Boy twisted some Pipe cleaners to make legs (I cut the pipe cleaners in half for him) and stuck them into a large polystyrene ball. He then made a head by sticking some eyes to a black pompom that he had stuck to the body. 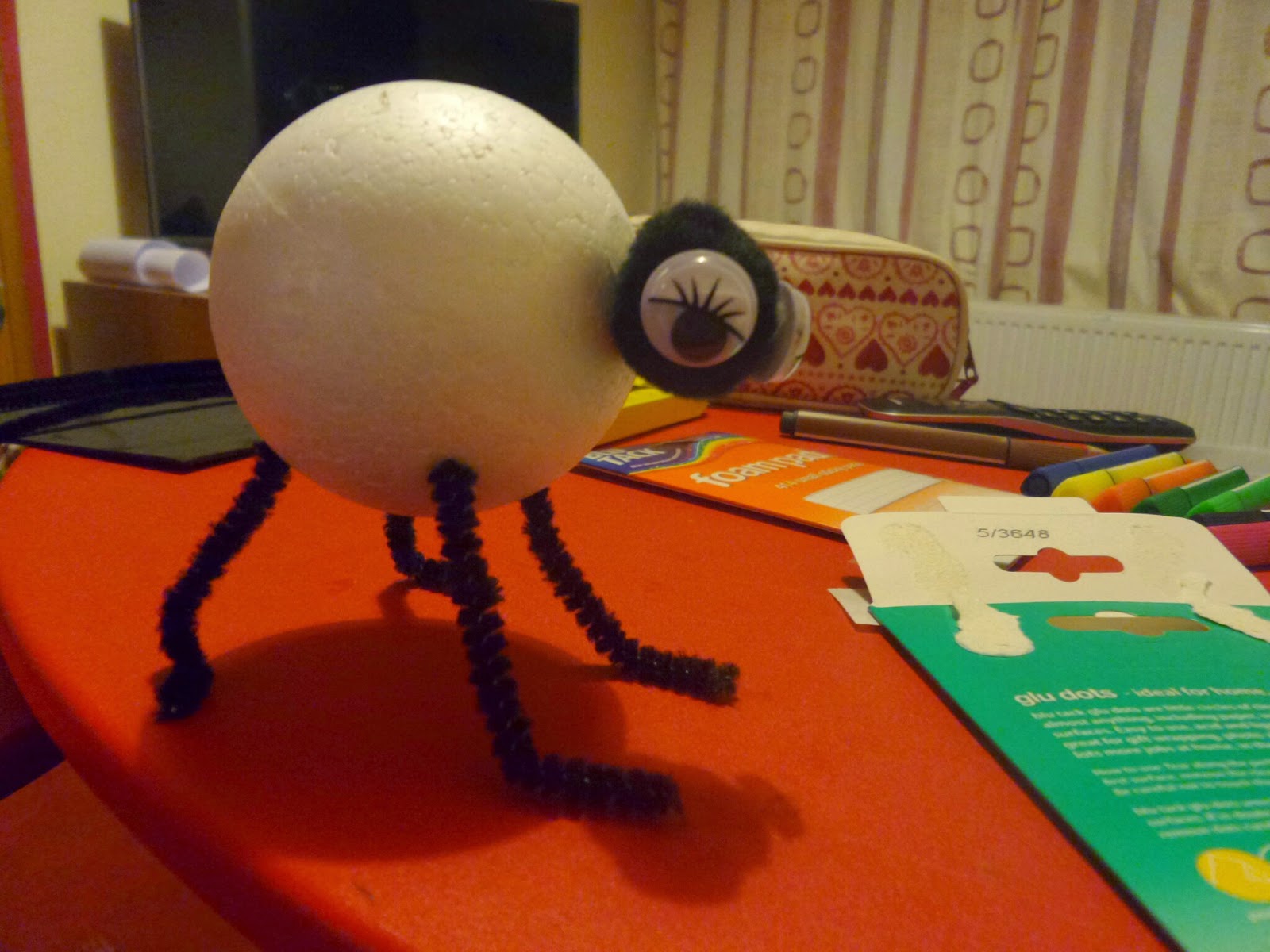 Big Boy was thrilled with his sheep, even he did think it looked a little like a spider and sheep had mated to create a Sheep Spider hybrid, which could possibly be the worst combination ever!

Top Ender took the gold and red shiny card and cut two strips off and then made a concertina with the two pieces to make the dragons body. 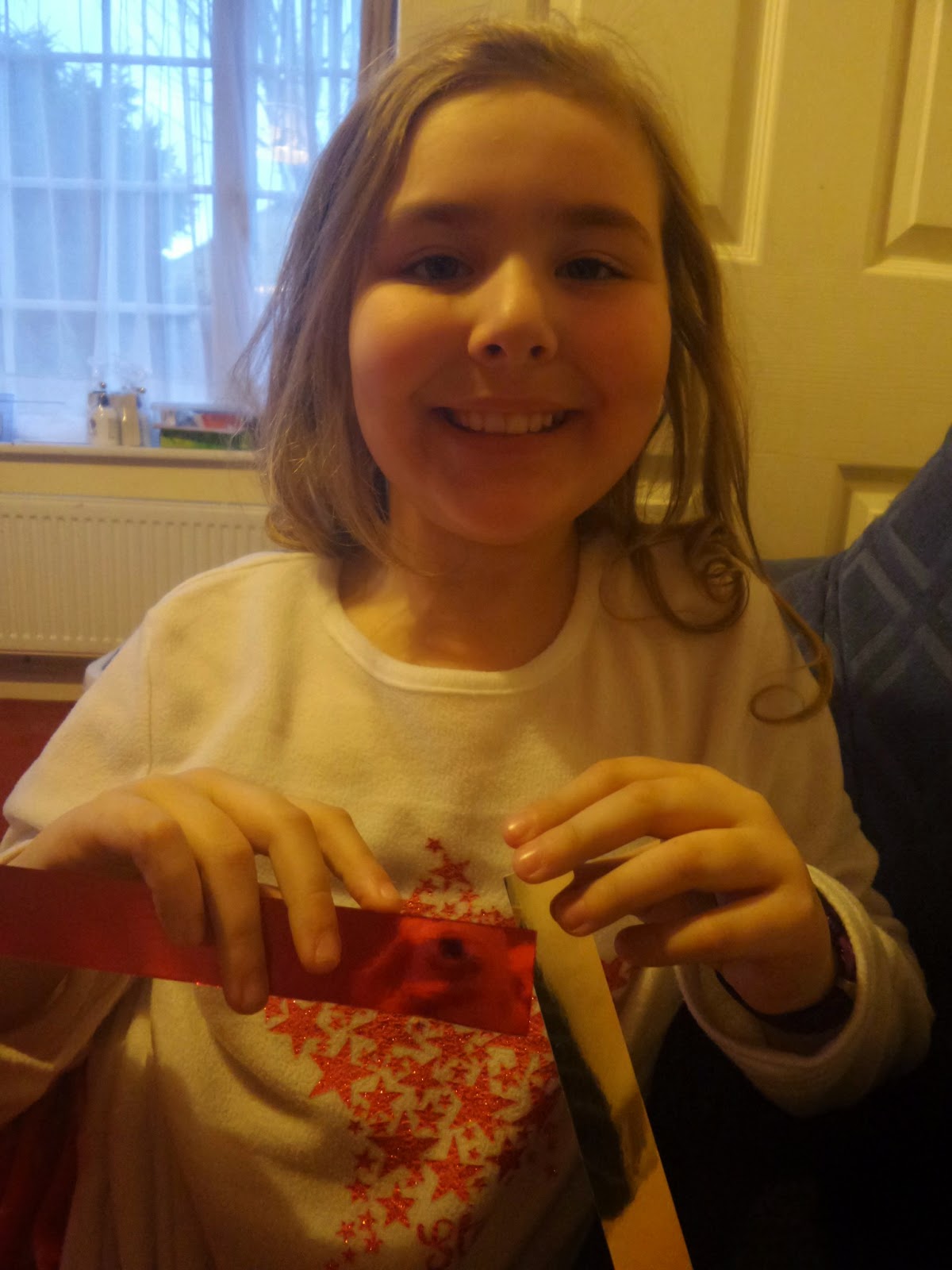 Whilst she was doing that I quickly drew a Dragon head and Tail which BB cut out, good scissor skills take practice and one I'm happy for BB to do, which is lucky as he loves cutting and sticking things! Once they were cut out Top Ender and Big Boy coloured them in using the felt tip pens they had got in their Monday bags, before sticking them together, sticking on some eyes and sticking lolly sticks to the body in order to make the dragon dance. 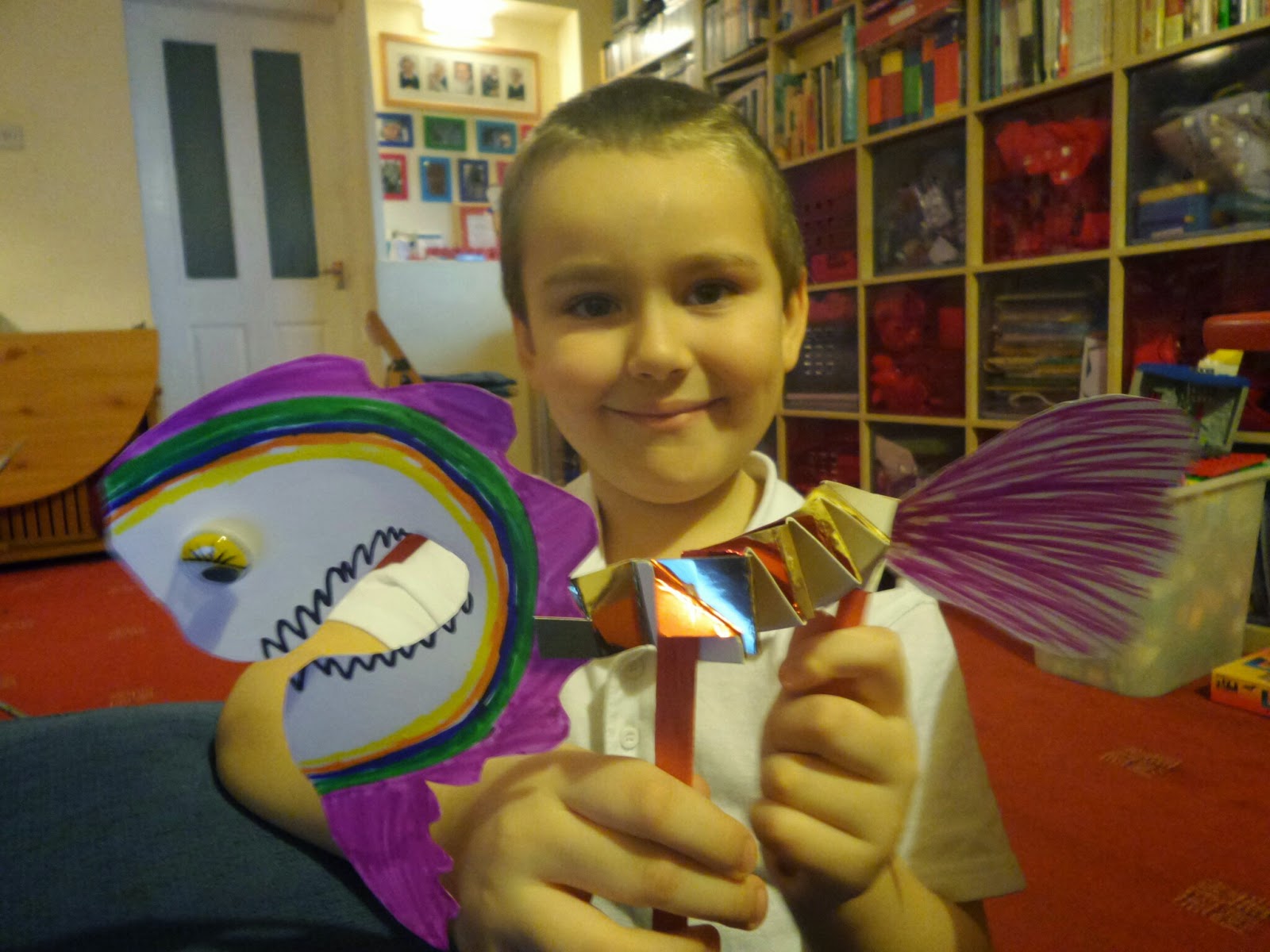 Big Boy was loving making the dragon dance around the living room, although he was a little annoyed that the body wasn't as long and as bendy as he would of liked. I guess we'll have to make more in order to get them as long and bendy as BB would like!

All the time I was sat with the children and we talked about various things that the children liked and disliked about crafting and art in general. BB is a natural artist and is brilliant at drawing and creating scenes that he wants to create, he's obviously a little undisciplined seeing as he's only six, but you remember that annoying kid at School that just seemed to be able to draw everything really well? That's going to be BB one day. Top Ender loves drawing and whilst she hasn't got the same natural ability that BB has, she doesn't care and will draw and draw and title her pictures things which would probably give a Psychiatrist a headache!

Eventually after the children had gone to bed, I got the craft box to myself and I wanted to create something cool and special. As normal however I had no inspiration of what to make and I sat there not doing a lot really... And then I realised (as usual!) that I was making something without realising it. My hands know a lot more craft than I do. I started making a Chinese Lantern, pretty standard at this time of year, but it was nice to "remember" an easy craft to do. I started by folding the red card in half (lengthwise) and cutting downwards from the fold to the other side, (about a centimeter from the edge) then I simply stuck it together in a cylindrical shape and stuck a gold tube in the middle (made by folding the gold card round into a cylinder too) and put some wool through the sides to allow it to be hung. 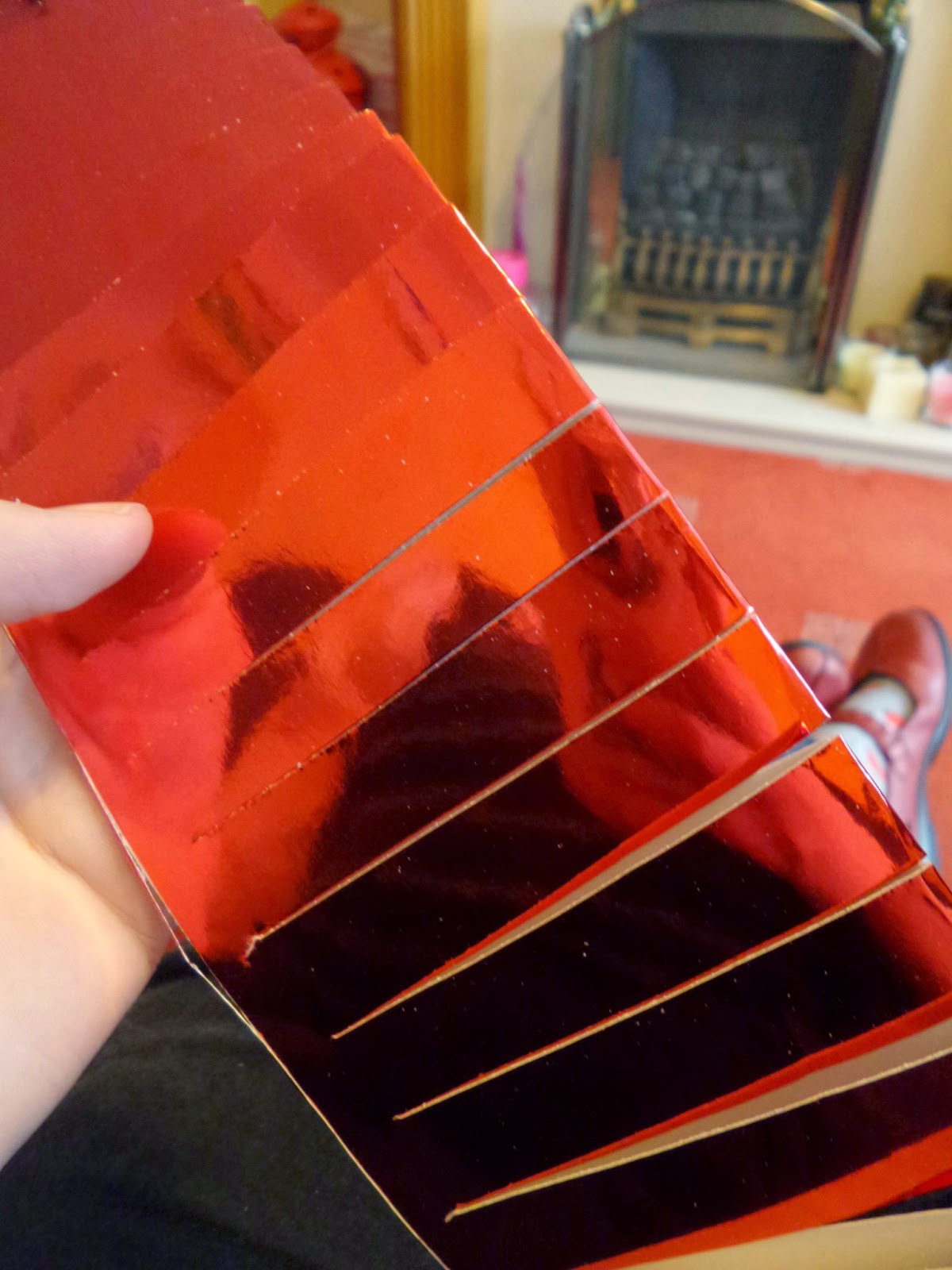 I decided that it could be hung from the Curtain rail, as the light from the window would reflect off it nicely. I was right. 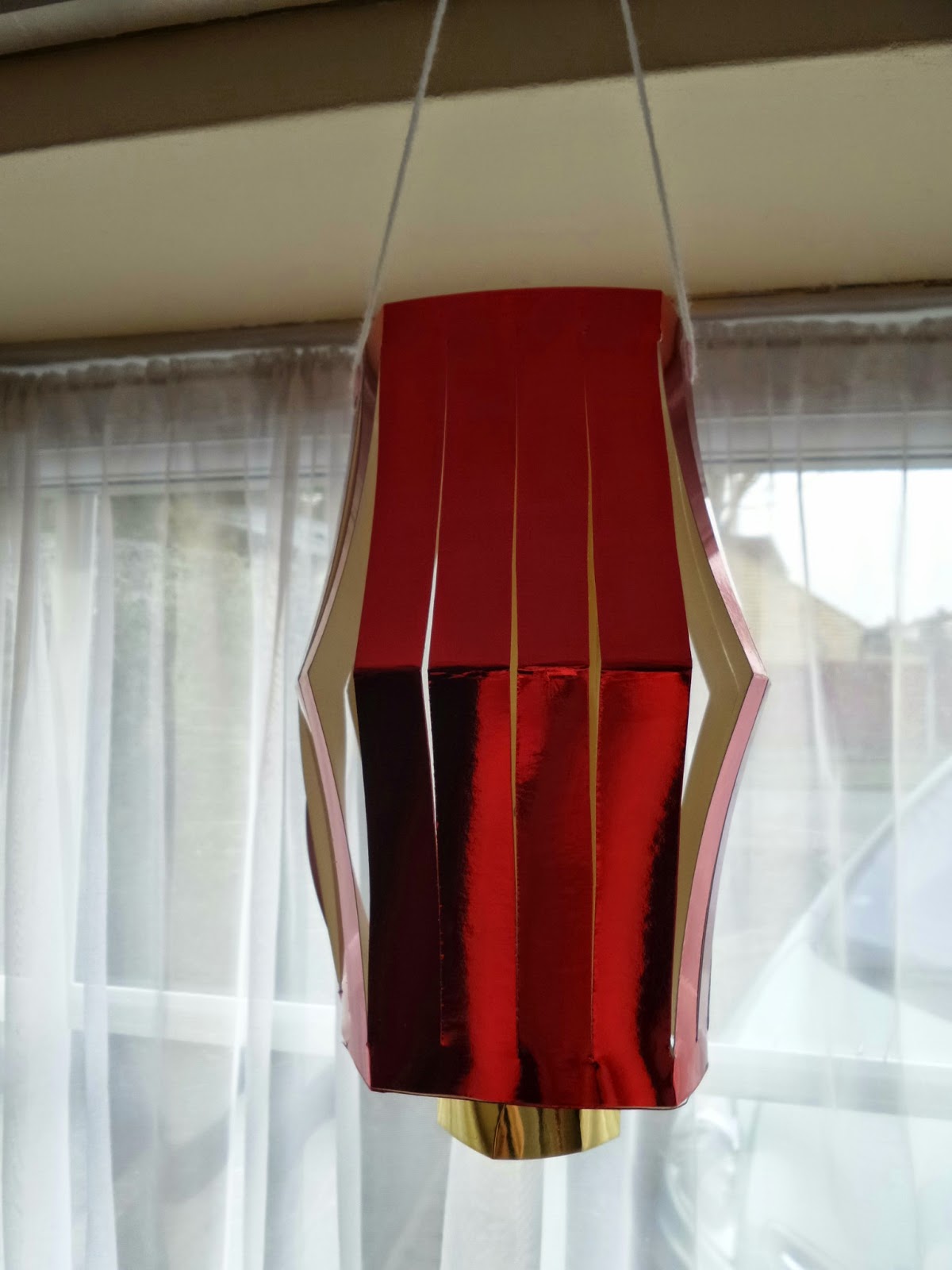 I then wanted to make another craft, and I thought about the Red Money Envelopes that are given on the last day of New Year and thought I'd make a different version using Gold Cups. I cut the top of the cup off and then squeezing the cup, so that it folded in to two, made snips at the middle and two edges. I then used those four snips to add four more in so that the whole of the top of the cup had a series of tabs. 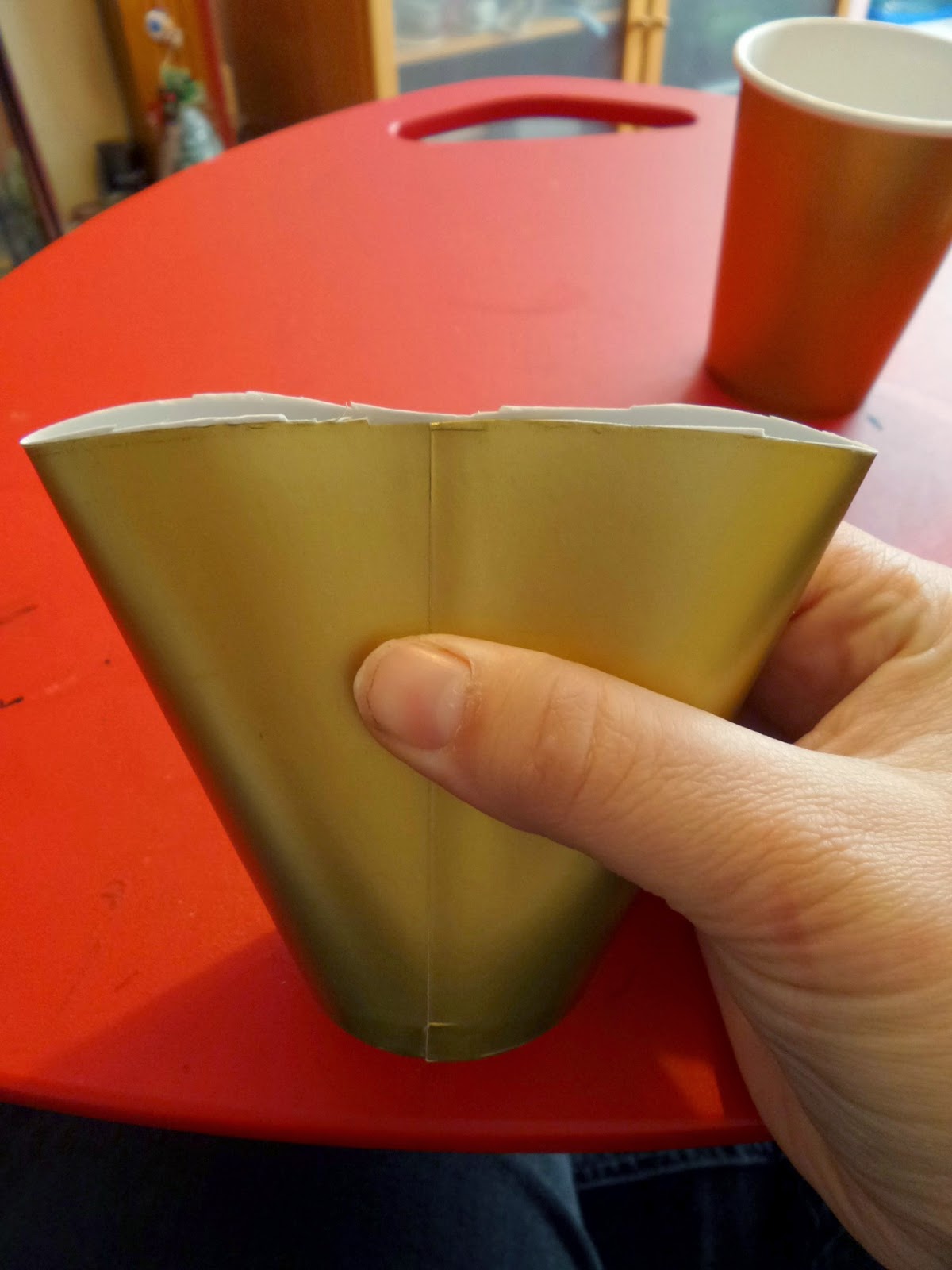 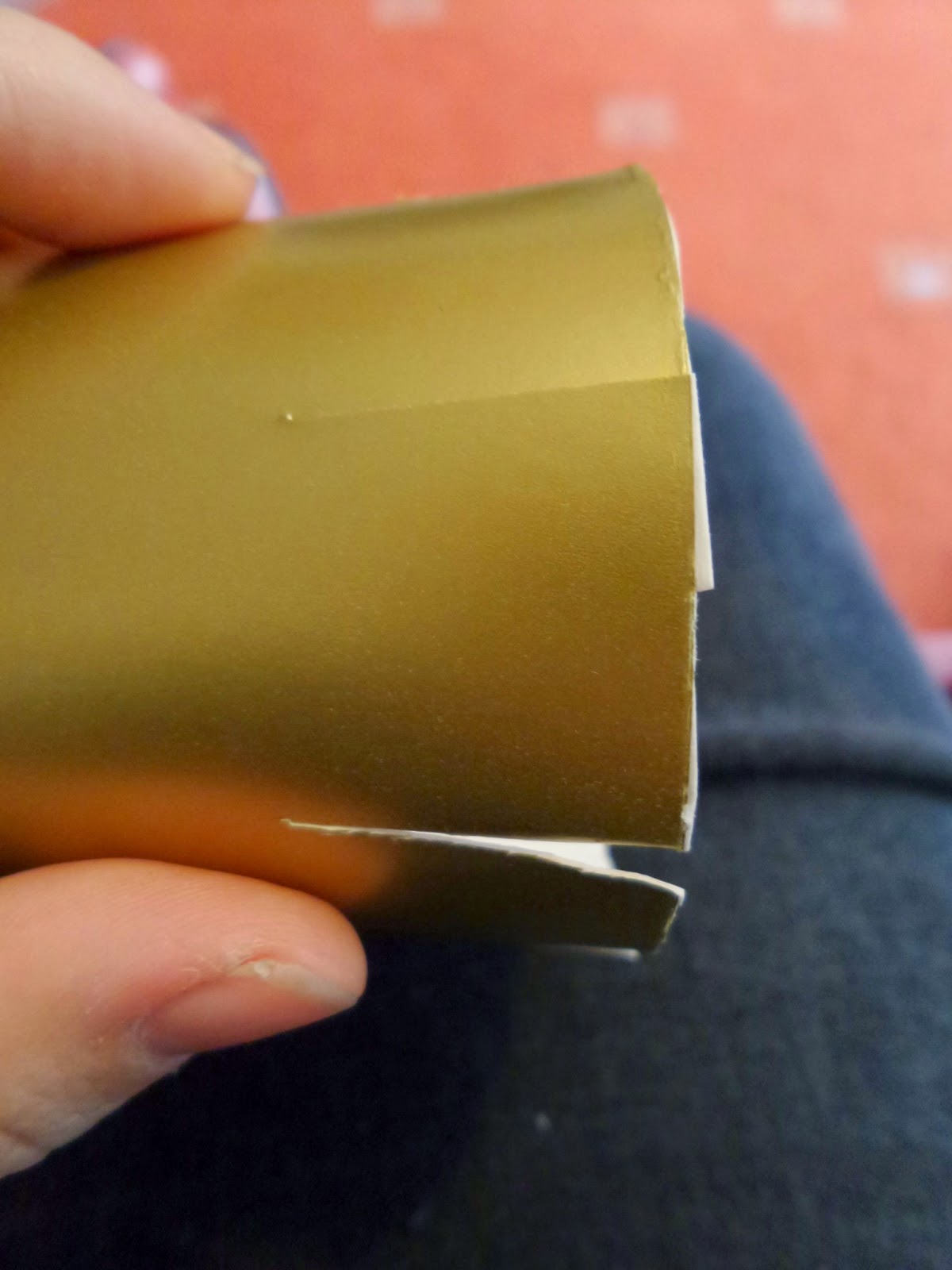 I then picked one tab and folded it in, folding the next tab over the top, and the next and the next until all the tabs were folded over. The last tab, I sneakily snuck under the first tab, so you couldn't be sure where the folds started and I think it just looks neater! 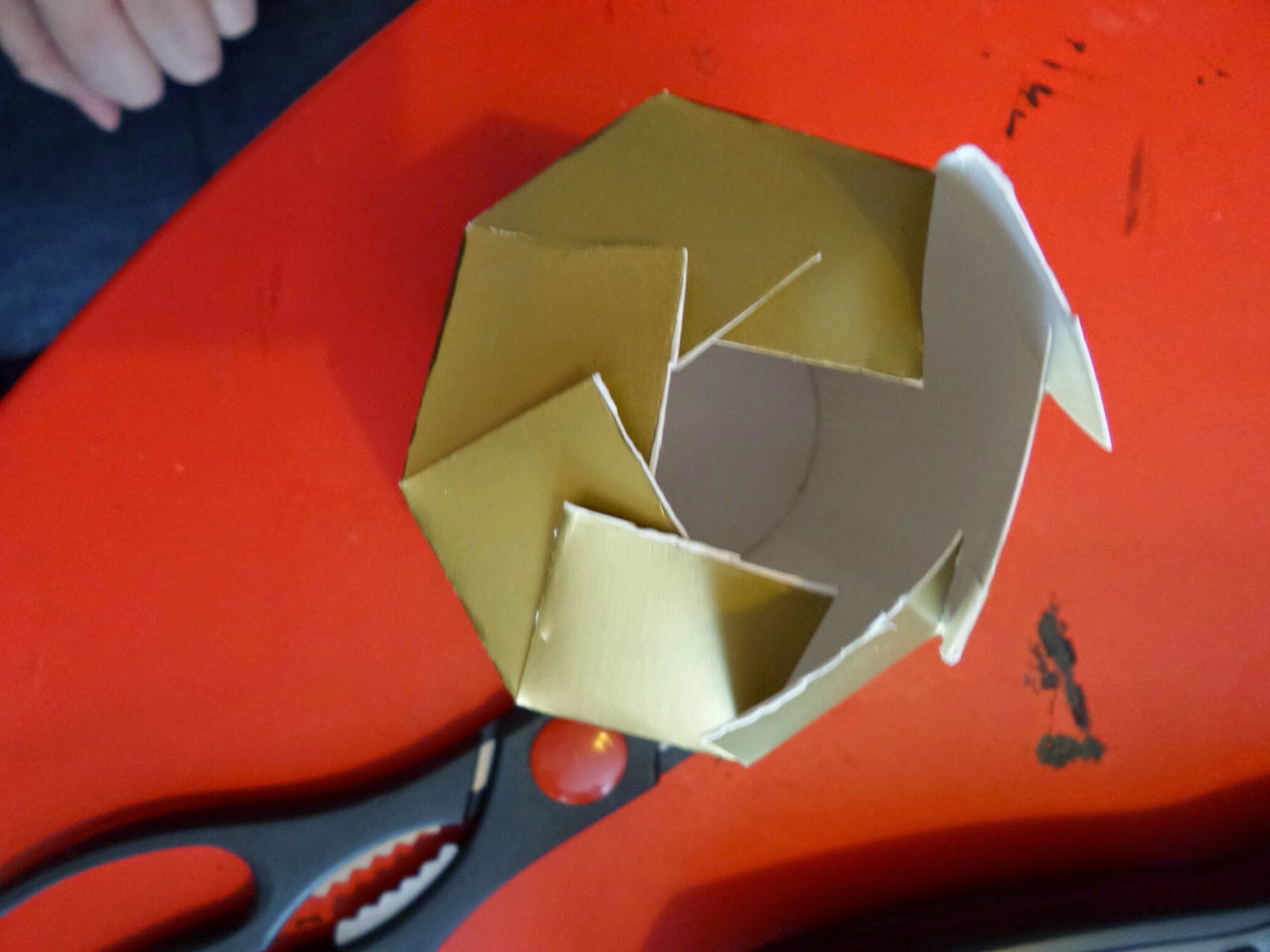 I put some money into the pots, but it could be anything that you put in as these don't have to be for Chinese New Year. It's essential however to put the gift inside now as you're about to seal it up and after that it's impossible to put anything in! 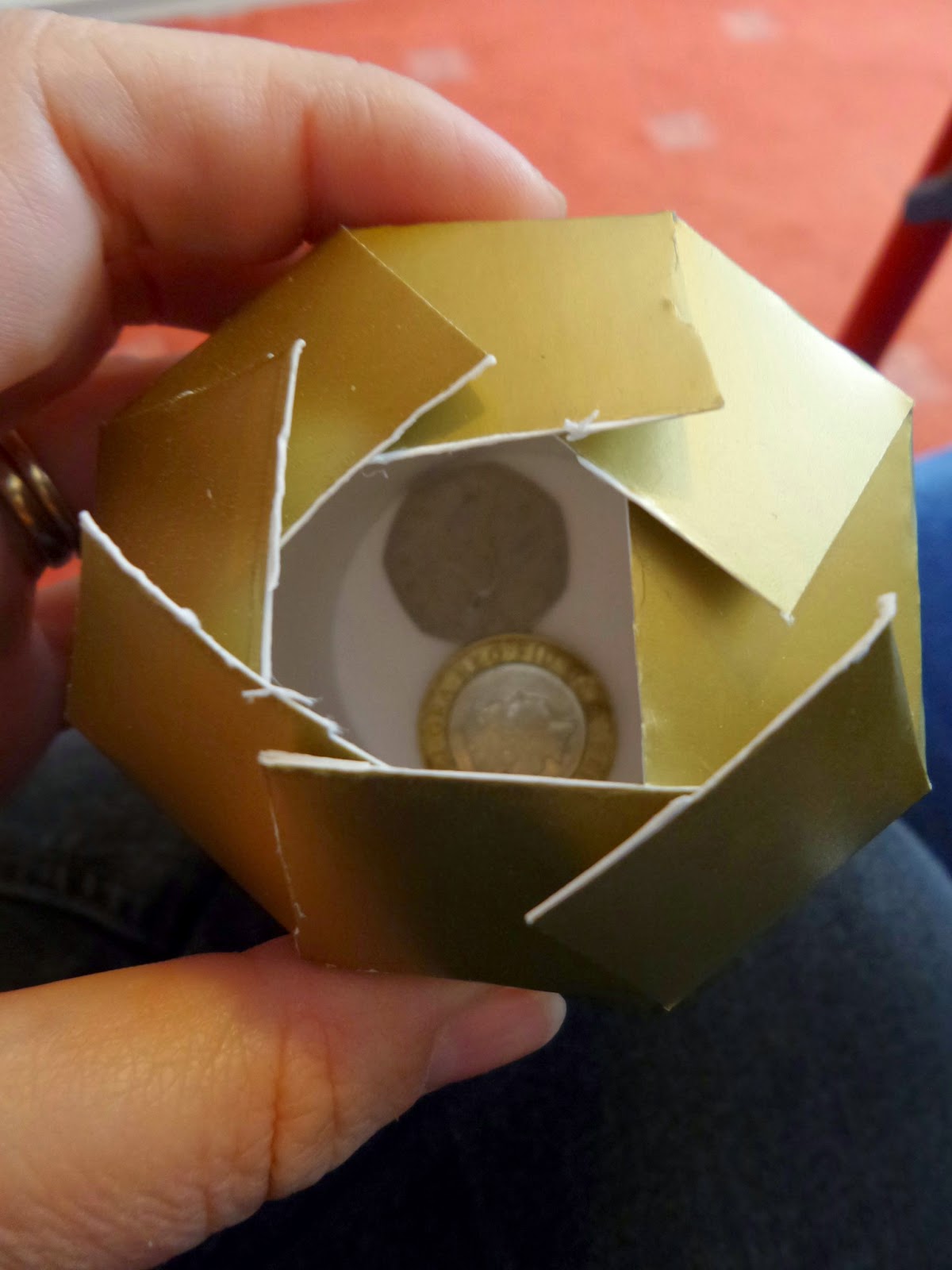 I sealed up the pots using a foam sticker and added a little gold ric rac to make a handle and of course added a little Chinese to the front of the pot. I believe that the Chinese says Good Fortune and is one of four or five things I can write in Chinese thanks to some forgotten hidden talent type thing. Or possibly years of wanting to learn to speak Chinese and only managing how to say Hello. 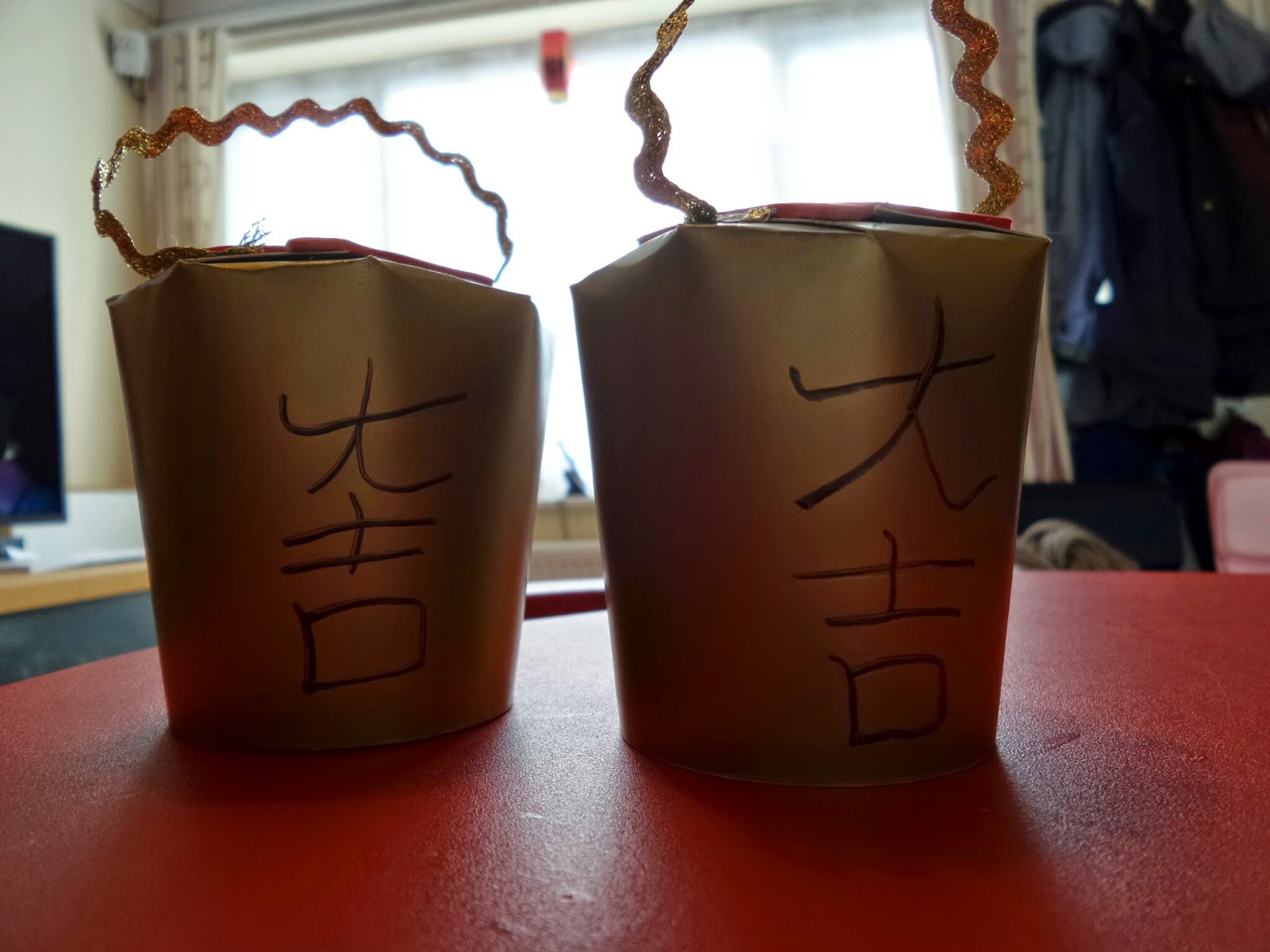 So there you go, my Chinese New Year crafts, and you could make them too if you wanted! Chinese New Year starts February 19th, will you be doing anything crafty to celebrate or teach the family about other cultures?

The box of craft items was provided to free of charge by Bostik as part of the Tots100/Bostik Craft Bloggers Club.
Craft Holiday New Year Sponsored Post