- April 19, 2017
Many years ago, when I was taking my GCSE's I decided that the best thing for me was to take Art. I have no idea why because if I am perfectly honest, I can't draw. I remember just a few weeks into the course the head of the department set us some homework. He wanted us to come up with some logo's for companies, whatever we wanted to do, it was up to us. I can't remember if I left my homework to the last minute, or as is more likely spent hours designing various different signs (we each had multiple signs on one side of A3 paper) well before the lesson was due, but what I do remember was the head of art picking up MY artwork and moving it to the centre of the table.

In my head, it has always sounded like a compliment what he said next, but thinking about it now I'm not sure that it was. The department head said that whilst this particular logo wasn't complicated it had been thought about. I've recreated the piece of art below so you can see what I did. 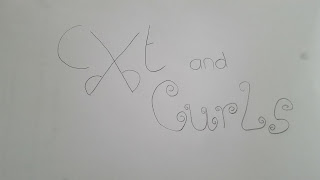 Yup, I decided to create a hairdresser called Cut and Curls, oh so original, right? Well, the point is, the teacher gave me a confidence boost because the best artist in the class (naturally talented), their work DIDN'T get picked as an example and that confidence boost led me to work my butt off in that class. I still couldn't draw, but I started practising and practising and learning new techniques until I still couldn't draw as well as the best artist in class, but I could draw. I had learnt a new skill.

And then after I left School I promptly forgot all about my drawing skill.

During meetings, I doodle. It's been noticed plenty of times before by various people who I sit near or next to in meetings. Normally I draw mice, but I branch out occasionally. Especially during Conferences or our weekly church services where I normally draw something that the speakers have spoken about. They aren't anything to write home about, however!

It isn't what I would class as serious drawing though. It's just something I do to help me focus more on what is being said. Yes, it may appear that I'm ignoring the meeting completely, but by giving my hands something to do I'm actually concentrating.

A couple of years ago, I told Facebook I had finished for the day and was going to sit on the sofa and just veg. After a little joking that I was going to be like one of the french girls I decided to draw *that* scene from Titanic. Which, even though I still haven't seen it everyone knows which one I mean. At the time all I had to hand was a packet of crayons and a pencil and so I produced this. 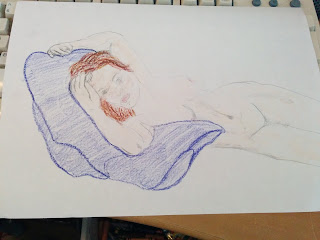 I'm still really proud of that one and hope if Kate Winslet ever stops by this blog that she'll appreciate it too. It reminded me that drawing is fun. That drawing is something I had learnt over the years of practice during my GCSE's and had basically forgotten about as a hobby.

I still claim I can't draw, mainly because my Facebook timeline is filled with people who can draw but every so often Dan Jon Jr asks me to draw items for his homework. It helps that Dan Jon Jr loves to draw but gives his reasoning that I'm much better than him and that if he has tried his hardest to write neatly then my help by drawing something better for work he is proud of is his reward. This has led me to draw both Tim Peake and Ludus the God of Gaming. 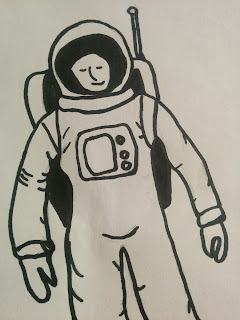 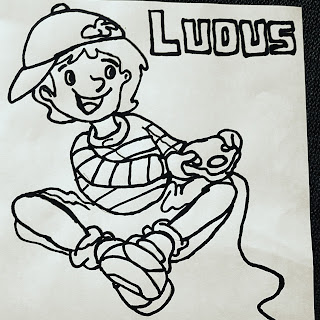 Not that long ago a speaker in Sacrament mentioned she liked Daffodils during her talk. I really loved her talk, as it felt as if she were talking to me personally (don't you love it when something you need to hear is said and it feels as if the talk was written just for you?) and so I drew one on the inside of a note card that I wrote for her as a thank you for her talk. 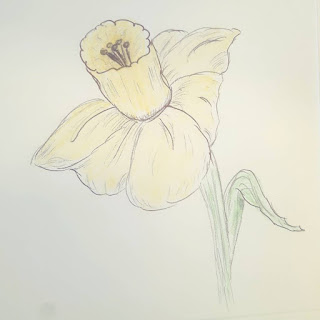 Luckily between me, Dan Jon Jr and Top Ender, we had enough art supplies to draw and colour the flower although I think that the children were a little worried when I started drawing in biro on the inside of the only notecard in my handbag!

My biggest project of late was just a few weeks ago when I drew a picture of Dan Jon Jr reading his Scriptures for an Art Show we held for the children at Church. The idea was that we were to depict something which to us represented the motto "Choose The Right" and I thought that Scripture reading was a brilliant way to show this. It was only after I had snapped a picture of Dan Jon reading one day that I realised how out of my depth I was actually going to be! 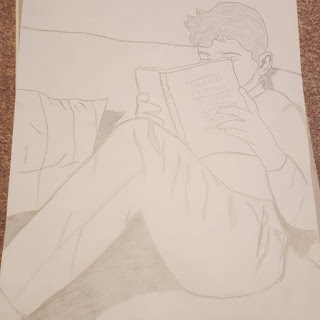 Despite singing A-ha's "Take on me" for hours after having drawn it, (and every time I see it after!) I was rather pleased with the drawing and had a few of the children who came to the activity giving me odd looks when they realised that the same woman who doodles stick figures on the blackboard can manage to create artwork like this!

Do they not realise how hard it is to draw on a blackboard?!

And it's given me the bug. I went and purchased a set of pencils and an art pad so that I could draw without having to keep borrowing pieces of equipment from the children. I've added some art equipment to my Amazon Wish List because I'd really like some watercolours and possibly some pastels for my birthday.

I'm hoping that maybe this time I won't forget this skill, and maybe I'll improve so that one day I'll actually be happy to tell people that drawing is my hobby.

Tell me about your forgotten skills, or skills you might not have worked on for a while. Hopefully, this blog post will inspire you to dust them off and practice them again!
Family Life Hobby