I was moaning to Dan Jon Jr about it, not realising that he was in an Xbox party with a friend of his and Dan Jon asked his friends what I should write about. Phoenix x Panda and FireProMoo suggested I blog about Cookie Dough Ice Cream, Pizza Hut Stuffed Crust Pizzas and Ponies... I'm not sure exactly what the three have to do with each other but it did get me thinking. 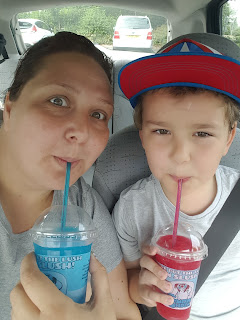 Dan Jon met FirePro a couple of years ago, through another friend he met online in an MPG. What happened next is kinda hazy, but eventually, they became friends, a gang of online brothers and now most nights I hear the three of them arguing over what world they are playing in, who won some game or what game they should play next. Occasionally the voice of reason in the form of big brother Phoenix cuts in and of course there are occasional other voices that join in too, voices that I've come to identify by screen names, not knowing anything else about them, because it's the internet and these boys know not to share their real names, their ages or even where they live.

I occasionally join in with the conversations. Reminding them in part that an adult is listening to their chatter and in part just wanting to be a part of the joviality, the camaraderie that they have together.

They remind me of Ponies.


Together they frolic and play and have herded together, common interests bringing them closer together in friendship and allowing them the chance to develop their social skills, their communication skills and even at times their Music, Maths, English and Language skills whilst they chat together about their day, their schooling, their interests and whatever else it is they chat about.

They remind me of Stuffed Crust Pizza.


Love it or hate it, you have to agree that it a stuffed crust is here to stay. These boys sometimes annoy the heck out of me when they argue and whine and complain and threaten each other with empty threats of reporting them to Xbox,

However, their friendship always wins out. They could happily spend hours playing together, occasionally going offline to eat their meals, or spend time with their family, or to go outside and enjoy the sunshine, or go to after school clubs, or the cinema, or for Scripture study (well Dan Jon Jr has to every so often!) or a dozen other things.


All of them have real world friends, but I think that the friendship that the have with these boys online is the equivalent of Cookie Dough Ice Cream, or what we would have once called the Cherry on the cake.

It's the indulgence of knowing that these boys are there for each other, that somehow despite living in different areas, the age difference (they are all around the same age, between 7 and 9 years old for the main boys and the older and younger brothers and sister being a few years either way), the difference in lifestyles and Schooling and health issues, these boys have found each other.


They have built a tribe and I'm kinda jealous.
Family Life Hobby