- April 22, 2017
When I was growing up, Saturday night was the night we all watched TV together as a family. I grew up when Saturday night TV consisted of family appropriate things like Blind Date, Noel's House Party, Gladiators, The Generation Game, Surprise Surprise, Catchphrase, Challenge Anneka, Blankety Blank, Stars in their Eyes, The A-Team, Knight Rider, You Bet, Paul Daniels Magic Show, Bob's Full House, Telly Addicts, The Russ Abbotts Show, The Price is Right, Wheel of Fortune, Family Fortunes, Strike it Lucky, Big Break, Cannon and Ball, Game for a Laugh, Beadle's About...

It sounds like all I did was watch TV as a kid, but that list above was shown over roughly two decades. Then again, it only took Flyfour and me about five minutes to come up with that list. I'm not sure if it is just remembering the best of things, but Saturday Nights were also Takeaway nights in my house. We would have Chinese most often, but occasionally Fish and Chips and I don't think I ever remember having an Indian as a Takeaway! 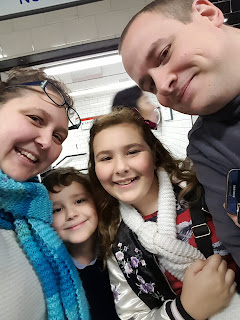 As I've said before Flyfour was raised in a similar household to me and he too has plenty of memories of watching TV as a family on a Saturday night (minus the takeaway). So it wasn't a surprise that Saturday nights became a family night for us too.

Before we had children, Saturday night was us making a meal together and then watching some TV. We loved making Chicken Szechuan with noodles and slices of buttered French Stick... although Flyfour's diagnosis of Celiac disease put a stop to that!

These days, I tend to try to think of a meal that we would all love and can share together rather than the takeaway I associate Saturday nights with from my childhood. We have things like BBQ Chicken Burgers, Nachos, Toad in the Hole, Living Room Floor Picnics. Basically, comfort food, which we eat sitting together talking about what has gone on in our week, what we are looking forward to or just talking about random subjects that pop into our head.

We have TV Shows that we watch as a family too, although at times one of us may be on an electronic device at the same time. We watch Doctor Who, Ant and Dec's Saturday Night Take Away, Britains Got Talent, The National Lottery Quiz Shows (I'm quite good at those!) and enjoy spending time together just like Flyfour and I did with our families when we were young.

TV isn't quite the same as when I was growing up. I mean I get that there are now a billion TV channels to watch, but like last Saturday proved the TV Channels don't care if you might want to watch the two big shows on the same night, deliberately making them overlap so you miss part of one or the other!

I've spoken with both the children about when we "make" them come and sit with us and watch TV on a Saturday night. Dan Jon Jr normally says goodbye to his online friends and tells them I'm going to watch TV with my family, which I think some of them find pretty strange. He's giving up a couple of hours of console time to spend it with his family IRL?!

Both children have confirmed however that they wouldn't swap it for anything because they LOVE the time with us, the watercooler moments of the next week where we'll remember a funny part of the show, or quote something that we as a family found funny or fitted in with something we'd experienced.

So Saturday Nights are Family Nights in our home, what about in yours?
Date Night Family Life