- July 20, 2017
Over the last few weeks, Dan Jon has been cracking us up with his jokes and misheard moments, so here is one of these that we hope you'd like to read and enjoy giggling at with us!

When we had decorated Dan Jon's bedroom, we had a few days gap between dismantling his old bed, painting the bedroom, having his new carpet laid and of course finally having his bed delivered and put together.

This meant, much to Dan Jon's delight that he was sleeping on a mattress on the floor of his bedroom. It was to his delight because Dan Jon hated the cabin bed he had been sleeping on and much preferred the bed on the ground thing. 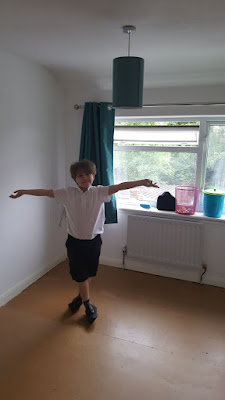 One night, Dan Jon had gone to bed early. He was sitting in his bed (well that's what he was calling his mattress on the floor!) and was just enjoying relaxing in his own space. Flyfour had gone upstairs to do a blood test on Dan Jon Jr, and as he walked into his bedroom Dan Jon gasped in a rather dramatic way.

Dan Jon, fell against his wall, grabbing his chest about where you'd expect his heart to be, starting wide eyed at Flyfour who was stood looking at Dan Jon rather bemusedly.

When Dan Jon had got over the shock of this, he found it hilarious that he could have forgotten about his bed being on the floor and that he thought that Flyfour had turned into a Giant, however I think that Flyfour and I will always remember the look of shock as the hilarious part!
Family Life Funny