- July 05, 2017
When Top Ender knew that I had tickets to go and see Dreamboats and Petticoats she was really excited because she remembered having gone to see it before and how she had loved the music and the story and she just wanted to see it again! So together off we went to the theatre. 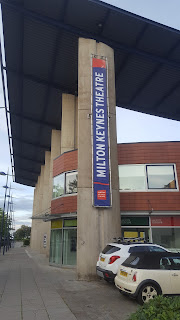 Now, you might think a thirteen-year-old and a thirty-eight-year-old are not the sorts of people who would enjoy a musical, that is not only set in the early 1960's but is also filled with songs from the 1960's, but having spent a lot of time with my Aunts growing up and having had a mother and father who loved music this thirty-eight-year-old has had a love of 60's pop music passed onto her and she's passed the love on to her thirteen-year-old too!

As such despite, being some of the youngest members of the Audience (we saw a girl of about eight in the audience and a couple of late teens/early twenty-somethings sat behind us) we had a blast, singing along with the songs, bopping in our seats and enjoying watching the drama on stage unfold.

The story follows a group of youths who all go to the same Youth Group, St Mungo's, enjoy pop music and a couple of them join in with the National Youth Club Organisation's music competition to write a song and yes unsurprisingly, they win! Amongst all this, there's a day out to Southend, a birthday party, teenage angst, teenage crushes, first love, unrequited love and it's all mixed in with a healthy dose of nostalgia.

There were some jokes which went over Top Ender's head (What's the point in having a best friend who works in a Barbers, which to me was obvious as meaning getting a prophylactic but poor old Tops was mightily confused as to why everyone was laughing until I explained) and I'm sure most of my knowledge of the jokes only came about because of having a fondness for sixties movies! 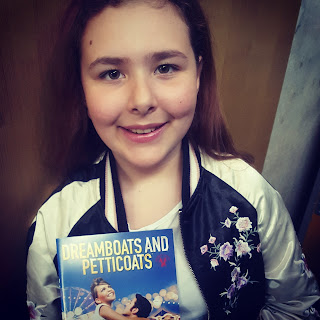 The show is the musical equivalent of comfort food and has a massive thumbs up from Top Ender and me.

Dreamboats and Petticoats is at Milton Keynes Theatre until Saturday 8th of July 2017 and you can buy tickets from the ATG Website.

We were given tickets in order to do this review.
Family Life Paid Day Out Review Theatre