- July 15, 2017
The last few weeks have gone so fast, I can't believe how quickly they have passed! I think that's the thing about having all the works going on in my house, it's really helped the time to pass! With that in mind, this is what is happening this week in our house and what we're eating. 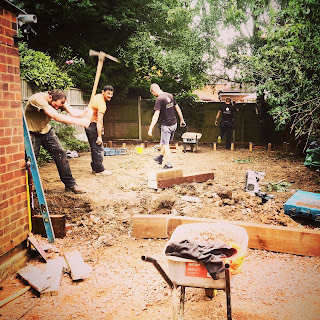 Flyfour makes a tray bake of potatoes and other vegetables and normally cook some onion rings when we have this on a Saturday, so I assume that's what he'll make tonight too! We'll eat it on the new patio... which actually isn't quite finished but Sssh!

I was really tempted to make something really super simple like everyone has a sandwich today because Flyfour will be watching the tennis and I didn't want him to be not watching the tennis... but I wanted something super tasty too so I went with Casserole. I can prepare it before I go to Church and it can cook away in the oven on low and be ready when we get back in.

So this really is a simple meal tonight. Top Ender and Dan Jon are going to have to fend for themselves as I am out and then when I get back in Top Ender and I are rushing off to the Theatre! As Dan Jon and I are going to be having a super picnic at lunch time together, I figure that a sandwich this evening will keep everyone happy.

Top Ender has a concert tonight, so we're having a simple meal of Beans on Toast so that we can be up to the School in time AND not have to worry about our stomach rumblings in the really quiet bit of the programme.

Only thing is I hate Beans. Can I have spaghetti instead?

Hopefully, by the end of today our garden will be completed... so what's a girl to do? Throw a garden party for her immediate family of course! I did think about having a BBQ, but I'm not sure that is entirely appropriate... plus I don't really want to have to clean the BBQ grill!

Luckily my BBQ Chicken burgers aren't done on the BBQ but under the grill so we'll have that and hope Flyfour volunteers to clean the grill afterwards.

It's a student staple, isn't it? Well, I still think I'm a student so we're eating it tonight.

Right so, I've been fancying a Chinese for AGES and tonight we're having one. If it is something from the take out range at the Supermarket, from the actual Chinese Take Away or something I've made at this point I'm not sure. I just know that we're eating Chinese tonight!
Family Life Food Main Meal Meal Plan