A Walk Around Intu Lakeside

- August 17, 2018
When Top Ender and I had finished our time at the Temple, there was really only one place that she wanted to go to. 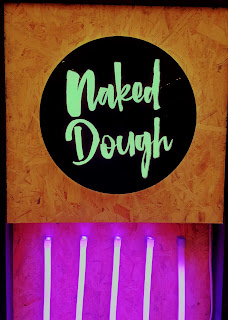 Now, for those of you not in the know (basically anyone that doesn't live within the boundary of the M25), Naked Dough is a cookie shop with a difference. It's a Raw Cookie Dough Shop, and you can buy a scoop or two of different flavours and... well it's just delicious okay?!

We went into almost all the shops, tried on clothes, found some raincoats that we really could have done with at The Temple and ended up not buying anything, not even a Costa Hot Chocolate! 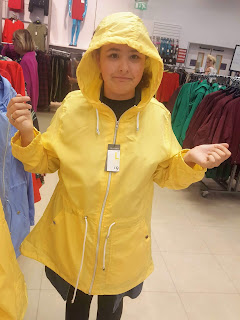 Top Ender wouldn't let me ride the train around the Shopping Centre, or go up and down the elevator pulling faces at the people that could see me. She refused to do the conga in a bookshop and she wouldn't wink at all the good-looking people we passed and banned me from doing the same. She did, however, let me buy her and her brother a small Christmas gift and Greggs may have had an extra couple of customers, as we were starving!

We found some beautiful butterfly wings on the wall, which Top Ender happily posed against, but wouldn't let me as she said I was too old, it was only for children. Apparently, she forgot that I am a child, but as she had the car keys and my wallet in her handbag I wasn't arguing as she could easily stop me getting home! 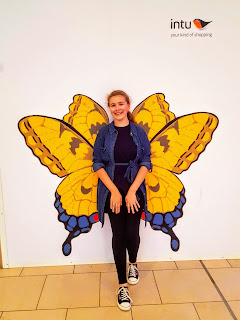 By pure luck we stumbled upon Naked Dough and had a lovely chat with one of the assistants whilst they filled our order and gave us some tips on what to do with the HUGE tubs that they sell, that we are always trying to get Flyfour to buy us seeing as he goes past one of the branches every day. 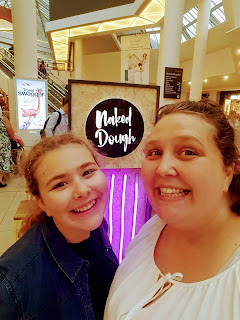 We eventually left and travelled home (which was a journey I'd never like to repeat thank you very much, it was a nightmare and it wasn't even rush hour or a Friday!) eventually falling in the front door with our naked dough, where we curled up on the sofa, watched a film and ate our cookie dough, before crawling up the stairs to bed.

It was a fab day, but boy were we glad to be home!
Family Life Free Days Out Summer