- August 24, 2018
When I was younger, my Mum would often (well it seemed often to me!) take a bowl of crisps to bed. I always thought that it was special and something I couldn't wait to do when I was old enough. As I got older, occasionally my Mum would share her snack with my Sister and I as we sat on her bed watching TV, and it was there that I got a love for different crips. When Emily Veg Crisps asked if I'd like to try their new Sweet Potato Sticks seasoned with Sea Salt, I said YES PLEASE, because A I love sweet potato and B I love free food. 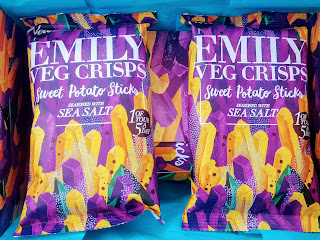 The packets are rather snazzy looking, I mean look at them! They are funky purple and they just look really appetising!


The first problem I had was opening the packet. They are made from some kind of material that doesn't pull open. Instead, you have to rip a bit down. The problem with this for me is that it's hard to get my hand into the packet or to get the Sweet Potato Sticks out! 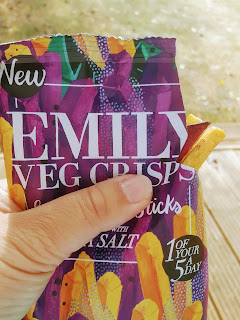 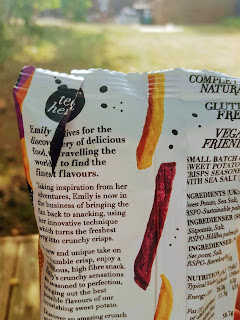 And no, I didn't see the "Tear here" sign for at least a minute, which led to much frustration as I tried to pull the packet apart... No judgements please, I wasn't reading the packet I was trying to eat the treat inside!

The sticks are as glorious looking as the packet, I mean I didn't even know you could get purple sweet potatoes, but they tasted as lush as they look and were as satisfyingly crunchy as they were salty. 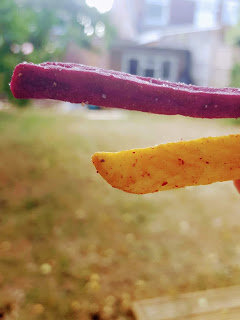 The big test was when it came to asking Top Ender and Dan Jon if they wanted some. They split a pack between them (unlike me they didn't want to ruin their appetite for their evening meal!) and afterwards commented that they'd quite happily eat them again in the future, or have them in their lunchboxes. Now I just need Flyfour and I to have an early night so we can eat these crisps in bed whilst watching our favourite quiz show!