A Delayed Gift From Santa

- December 26, 2018
On Christmas Day, after dropping my Mum off home and emptying the dishwasher we had settled down for the evening. Well, Flyfour emptied the dishwasher and made the kitchen all neat and tidy again, I was sat on the sofa trying not to cry with the pain of sciatica and watching the end of Strictly. Top Ender was in her room reading one of the 12 books she received from various relatives and Dan Jon was in the Den playing on his new Xbox One game.

Flyfour and I were sitting watching Michael McIntyre's Big Show, when he went to the hallway to have a rather odd sneezing attack. A few minutes later and Top Ender appeared downstairs, "I've had a strange text message" she said and presented her phone to Flyfour and I.

It was a message from Santa. 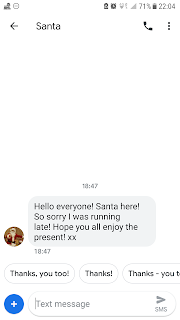 So began the hunt for delayed Christmas gifts, with Flyfour finding some under the Christmas Tree, that were most definitely not there when we had opened our gifts earlier in the afternoon.

They were pulled out from under the Tree, and the label read. It was to everyone. I got a little emotional at this point, as I knew that this was a gift from Flyfour, I just didn't know what it was, but knew it wasn't a puppy. 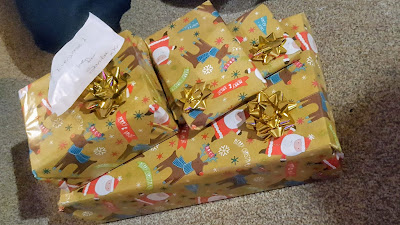 Flyfour organised the children into opening the large gift at the bottom together. Whilst passing one of the smaller gifts to me. We started to open the packages and found a Nintendo Switch, a couple of games and accessories.

Yup, Flyfour Santa had surprised us and I was in tears.

It was a family present which, not only had I known nothing about, but that completely flabbergasted the entire family as it had been something we four had been saving up our loose change to buy. Of course, within minutes the children and Flyfour had the console set up and I'm the only one that hasn't yet had a go!

There is plenty of time for that, in the next few weeks. Now I just need to work out what games I want. Is Pikmin for the Switch out yet?!
Christmas Family Life Nintendo Switch Technology