- December 14, 2018
It was only in the last few years, that I realised that going to the Panto at Christmas was a very British thing to do. As I've spent more time with friends from other countries who have made Milton Keynes their home I've realised that they have no clue about the genius that is shouting at a fully grown man "It's behind you!" because he can't quite see the one thing he is looking for. Of course, they also don't understand smacking one's thigh, the very thinly veiled innuendo or why everyone is willing to believe for two hours that Sherwood Forest is just down the road from Milton Keynes.

Milton Keynes Theatre were once more kind enough to invite us to see the Panto and we bumped into Santa! 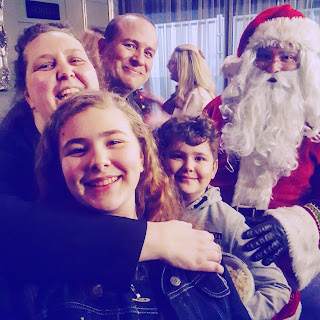 For the last few weeks, as our family have walked around the Shopping Centre, large portraits of Shane Richie, with smaller images of Peter Piper and Gina Murray have been gazing down on us. We were expecting a lot, from Shane Richie and right from the second he walked on stage we weren't let down. He encouraged us to get our mobile phones out, to take a picture of him and then he spent a couple of minutes posing in various "seductive" ways whilst the audience roared with laughter and of course snapped away, before putting their phones away as Shane told us to.

I would share my picture but, honestly, I don't think anyone needs to see my terrible photography!

The Panto itself was fabulously funny, there were several moments where Dan Jon, who was sitting next to me, turned to me eyes wide as he realised what it was that was said and what it actually meant... Yup, my innocent little boy is innocent no longer!

As always, the friendly mocking of the local towns and certain areas of Milton Keynes with certain reputations got the biggest laughs, with those at the expense of Peter Piper, playing Friar Tuck a very close second. 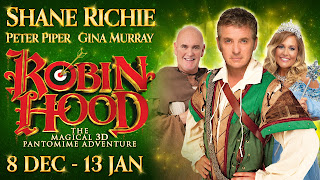 The Panto is a perfect place to go to this Christmas, it's a chance for family to be together, to laugh together and to enjoy the wonderful spirit that fills the air this time of year. Take a look at the ATG website to find out what is on at a theatre near you this Christmas, or to buy tickets to see Robin Hood at Milton Keynes and remember, What happens in Panto, stays in Panto!
Christmas Family Life Paid Day Out Review Theatre