- December 30, 2018
I had originally intended to post this, the weekend that Tops and I went to the Temple. For some reason, I forgot to schedule it! So just imagine, this is back in November and I thought you might appreciate a quick recap because you might not want to reread about our Overnight Temple Trip. Tops and I were going with our Ward to the London Temple arranged to stay overnight in the Temple accommodation, and therefore drove down the night before most of our friends and basically sat and watched TV on my laptop in our room under we felt sleepy.

Saturday morning, I woke up fairly early and tried to be as quiet as I could as Tops was still sleeping in the bed right next to mine. I played on my phone, I got up and did a bit of so-called work on my laptop, I threw on some clothes and went and took a picture of the sun rising over the Temple from the Reading Room and made it back all before Top Ender even thought about waking up, uncharacteristically, early. 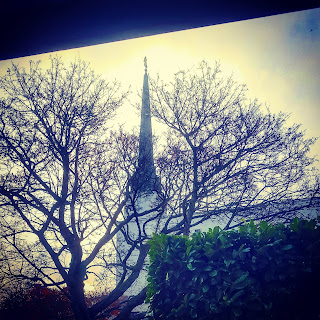 We ate breakfast together, we got dressed, we packed up our car and we headed to the Distribution Centre to buy a few bits that we wanted for Christmas and where we got the first glimpse of friends of ours and it looked like they had spent the night at the Temple too!


We walked around the grounds for a little, before bumping into our friends, and another ward member a few minutes later. As we were talking, we wondered when the rest of our ward would be arriving, so I messaged a group chat on Whatsapp of the young women to find out... and found out that the coach had broken down just 20 minutes away from the Temple.

Tops and I took the extra time we had to nip to a local village, where miraculously there was a Costa and grabbed large Hot Chocolates for me and one of our friends (the other two had gone into the Temple) and an Orange Hot Chocolate for Tops. Not long after we got back, a few more friends started arriving, having driven down rather than come by coach and before long the coach with the rest of our friends arrived too.

I think it was the Hot Chocolates that did it!

After a long time on the Coach, several of the Youth wanted to go for a walk around the grounds, so they went off for a walk. It was also in part the same reason that Tops and I had wanted to walk around the night before. There is something sacred about the Temple grounds, you don't notice the planes that fly overhead or the cars driving past on the road. It's peaceful, it's refreshing. It's Spiritual. 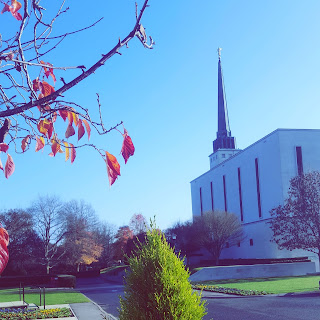 There were a few members who were attending the Temple for the first time, so whilst we ensured they had the, now traditional, photo shoot with the Temple in the background and ensured everyone had eaten before entering the Temple, we all started to prepare ourselves, to enter what to us is a very Holy building.

I think the whole day could easily be summed up by an event which happened not long before we left. The youth and various grown-ups were sitting in one of the rooms, and we were singing together. One of the hymns picked was "Nearer, My God To Thee" and as the youth sang, well I'd been near to tears most of the afternoon because of how much I love these young people and seeing how lovingly they treated one another and the song just finished me off.

I was openly crying at how beautiful they sang, at the words, at the love that was in the room at that moment. It was quite simply a perfect moment and has me eager for the next Temple Trip.
Family Life Religion