- December 24, 2018
One of my favourite Christmas Traditions is something that I have no control over. I'm not really sure how this tradition started, or even when, but as far as I know, a few families in our ward (Church Parish) decided one Christmas Eve to go Wassailing. Someone also thought it would be fun to come to the A Mother's Ramblings Home to sing and well, they've been coming every year since and it's not Christmas until these families have been and sung to and with us. 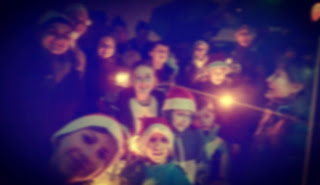 I'm not sure how I knew, but the plan this year was that they would come on the Sunday before Christmas Eve, or as it's jokingly called in our house "Christmas Eve Eve" and so as soon as we got home from Church we started patiently waiting. Okay, I started impatiently waiting.


Honestly, every time I heard a noise outside I was checking to see if it was our friends. It was getting later, and to be honest I thought that they may have forgotten us, or decided to visit others in the ward... and then we heard a noise on our driveway. It sounded like several small children had decided to camp out and we knew, who it was.

We hadn't been forgotten!

As we opened the door, a chorus of voices started singing "Ding Dong Merrily On High". Our friends were stood there, holding Luminaries and it was just so filled with love. The children sat on the stairs to listen, whilst Flyfour and I stood listening in the hall. I don't think that even The Tabernacle Choir at Temple Square would have sounded as good as these friends.

As they finished, I quickly yelled "Don't move! I left my phone on the sofa and I need a picture of you all!" They giggled and quickly agreed to pose for me, in exchange for the use of our bathroom as several of the party needed to go!

The best bit about this slightly unscheduled bathroom stop was that whilst those who needed the bathroom went, the rest of the group continued to serenade us. It was fabulous and just before they left, they passed to me a small Candle, for my ever-growing collection. 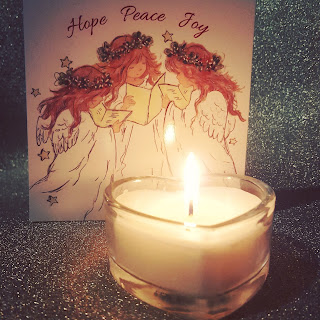 Having known that they were coming, I had treats ready and so handed out a box of Candy Canes, which they passed out to everyone as my friends came to say goodbye, offer me hugs or just to wish me a Merry Christmas again.

As they left, a few neighbours came to talk to me. They had been standing at their own front doors, listening to this heavenly sounding throng. They too, look forward to this annual Carol Singing at my front door. Loud enough that they too can enjoy the music, far enough away that they don't feel awkward about listening in and of course, they too feel now that Christmas can't officially start without the joyous sound of wassailing.
Advent Christmas Family Life Music Religion