- August 24, 2016
This is part three of our Irish Adventure. You can read Part One (with real magic) and Part Two on those there links!

Top Ender loved Ireland too. Apart from the fact we kept seeing Petrol stations named after her (So now she owns a Pizza Chain, a Tile chain and a chain of Petrol stations) and at least a dozen stores which all bore her first name she loved the feel of Ireland. 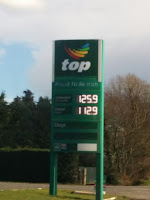 Everywhere was relaxed, even in Dublin people weren't rushing about and that was in the non touristy bits too. I don't know if it was just because there seemed to be more space, or what but even rush hour seemed to only last a few minutes!


Top Ender has since said that she loved that it only ever rained when we were in the car (apart from one sudden downpour when we were in Dublin) and that we saw hundreds of Rainbows as we drove along almost empty motorways. 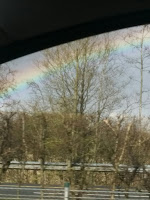 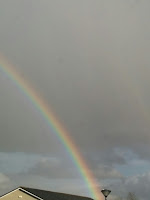 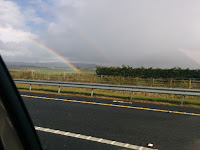 I've sort of mentioned it already, but there is an amazing amount of Art in Dublin. There was this strange sculpture at Trinity (below) that some people believe looks like a sort of Zombie Pac Man, there were murals and we went to the Irish Museum of Modern Art too. 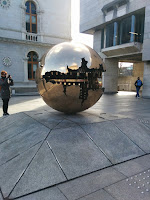 It was at the Museum of Modern Art, that we were warned about "Graphic Images" in the art work and that we might not want to visit an exhibit with our Children... so after I politely accepted full responsibility for my Children entering the Patrick Hennessy exhibit (with a comment along the lines of  "My Children have been to several Art Galleries and Museums before, I'm sure they can handle seeing a nude painting or two") we walked round looking at the various works that were there and I kept my fingers firmly crossed that I wasn't about to ruin my Children's lives.

Just so you know the only thing I knew of Patrick Hennessy and his art was that he was Irish. I didn't know that he was gay and a lot of his paintings are of men in various states of undress. We saw a lot of paintings of butts and penises and my two didn't giggle, point, stare or anything. In fact both of them made comparisons to Hennessy's work to other Artists they knew and talked about the positioning of people and things in the pictures and the importance of shading and tone and the like.

Walking back out of the exhibit, passed the lady that had "warned" me the children seemed to me to speak a little louder about the importance of perspective and how standing to look at a painting from the wrong angle can make some people feel inadequate or extremely lucky with what they were born with.... I love my Children so much especially when it sounds like they know what they are talking about!

The real highlight of our trip for me, was the visit we made to the Irish National Heritage Park. Oh my goodness, that place was amazing. We likened it a little to the Chiltern Open Air Museum (which we love) but it was so much more. There were huge signs giving you the information you needed about each dwelling, a special worksheet for the Children to fill in (and they got a certificate at the end of it), brilliant displays and interactive exhibits for the whole family to try their hand at and Top Ender and Dan Jon Jr both had a little go at Archery in the grounds of the Castle. 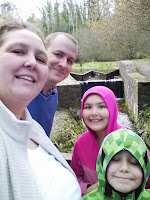 It was a beautiful place and well worth the entry fee (€25 or about £20). The information says you need about two hours to do the site and try your hand at the various exhibits which is about right. We didn't rush our way round and were they for around two and a half hours possibly three (but that included the Archery which is an optional extra but was again only a few Euros) but felt we could have stayed another hour or so just exploring and learning.

We did of course visit Blarney Castle and I'm pretty certain this was Flyfour's favourite place. Flyfour and I both kissed the Blarney Stone, but the Children were hesitant to do so... something to do with the drop and both having developed a fear of heights. I can't say I blame them the iron bars they have put under the stone to stop you from falling to your death still don't make the thing look very safe. 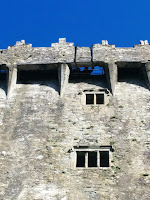 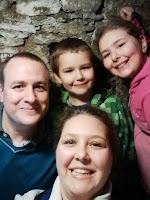 We loved Blarney Castle and it truly deserves a blog post all of it's own because it was seriously amazing. There is more than just the Castle and the stone, there are grounds, waterfalls, gardens, a fairy garden, wishing steps, a cave, a witch, ghosts, a dungeon and we even found wandering groups of Madrigal singers!

One evening we didn't have anything much planned and Flyfour googled and found a beach that was near by. We drove to it and oh my goodness if it wasn't one of the most amazing beaches I have ever seen! 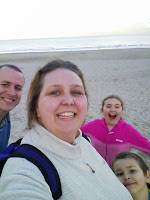 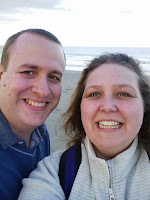 It was HUGE and clean and beautiful and just amazing to be on at Sunset as it was almost deserted and we practically had the whole thing to ourselves. 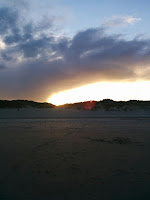 Now, since coming back whenever someone has asked us what we think of Ireland the one thing that Flyfour and I have said is that Ireland is BIG. We worked out in the end that it was because out of the built up areas, the panorama was HUGE, seriously driving up the motorways we could see for miles in all directions and it was just beautiful and amazing and if I'm honest, I could totally see myself living in Ireland.

And that is the end of our Irish Adventure, well this trip anyway!
Family Life Free Days Out Holiday Paid Day Out