- June 08, 2020
Saturday evening, Flyfour and I were thinking of going out to gather some snacks from Waitrose, as when we'd been shopping earlier that day, we'd done the very clever thing of only getting the food we'd need for the week and completely forgetting that several times a week we go to our snack cupboard to get something and there wouldn't be anything as the cupboard was almost bare!
As it had been raining on and off during the day, Flyfour opened the curtains to check before we made a run to the car, when he let out a giggle and said we were being watched. I rushed to the window and sure enough, there was something staring straight at our living room window. 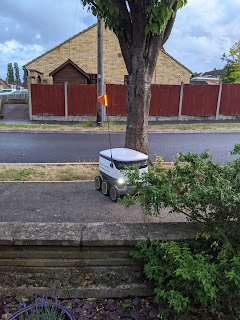 Yup, a Robot had stopped at our house and was looking straight at us.
We thought that maybe it had got a little stuck and so needed to have a human take over the controls for a bit and was just waiting for the connection to the head office somewhere in San Francisco and so after taking a photograph (I mean obviously!) we headed off to Waitrose to collect our snacks.
Only Waitrose didn't have the snacks we really wanted, so we had to make do with just flapjacks instead of the fabulous Nutty and Seedy Flapjack, not that we were really disappointed because even their ordinary flapjacks are lush. We returned home almost an hour later and our little friend was still there. 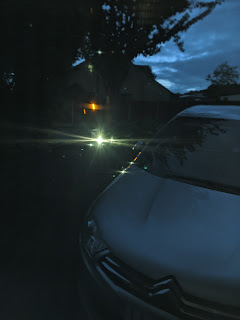 I used the app and sent a quick message to someone at Starships, hoping that they would be around as they are eight hours behind us, to let them know that possibly one of their robots was lost outside our house as whilst I was sure they had GPS in, I was pretty sure that they would have come to rescue it already if they knew where it was.
About thirty minutes later, a man in a van turned up and rescued the robot putting to an end his spying on our house (yes, of course, we left the curtains open so we could let him see in), but we told him to come back and visit us any time and that he was always welcome for a cup of Hot Chocolate or cup of oil or whatever it was that he wanted to drink.
I really do hope he pops by again soon!
Family Life Funny