- June 17, 2020
A few weeks back, I read something that made me think. I can't specifically remember what it was that I read, but basically, I realised that sometimes I'm a crappy wife to Flyfour and so I vowed to do better.
How could I do this?
Well, something that I thought was to show an interest in something that he found interesting that I didn't.
Like Bond. 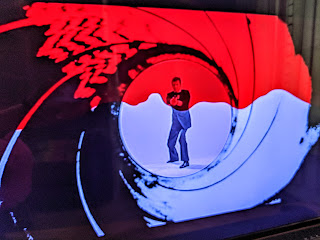 See in our home, Flyfour really enjoys Bond movies and me? Well, I say that Bond is an anti-hero and only partly to wind Flyfour up.
I mean, the Man kills people for a living, he is forever having "relations" with sexy young things, he drinks, he gambles, he lies and cheats, he defies his boss, he isn't careful with the lives of those around him and he must be the worst spy in the world as everyone knows who he is.
Anyway, Flyfour loves the movies and the books, having read several of them, and we own every. single. movie. So it made perfect sense to me that as long as Flyfour was okay with me pointing out all the absolutely hilarious goofs, terrible plot points and dodgy special effects that I'd watch ALL the Bond movies with him and learn to love them.
So, each Sunday evening we've been going to bed early and watching a Bond film of Flyfour's choice as my suggestion of watching them in order was met with derision, as was watching them in Rotten Tomatoes ranking and attractiveness (as I find them!) of Bonds.
Despite not having managed to watch a full film yet (I keep falling asleep before the end), I think that this has been a brilliant way for Flyfour and I to bond (hahaha, see what I did there?) and hopefully I'm a little less of a terrible wife too!
Family Life Film