- June 02, 2020
If you know me in real life or have read my blog for any length of time, something that should be quite obvious to you is that I like hanging out with my family. It might be that we play a game together or go for a walk, or bake or just eat a meal together but as long as we are hanging out together I'm quite happy.
A few weeks back now, Top Ender and I were talking about planning a day off from our usual chores and responsibilities in lockdown. It would be a day to hang out and do nothing other than what we wanted and it slowly progressed into an idea to spend the day in the garden, in the sun enjoying reading and watching movies on our tablets or laptops, listening to music and just being at one.
The plan for the day ended with us having a BBQ and watching a film on Top Ender's projector, which suited me fine. Although I didn't want to clean our Big BBQ, so I cheated and purchased one of those small disposable ones instead! 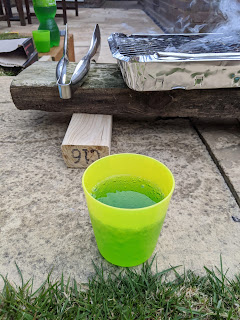 We joked that Top Ender being the most senior Guide in the house was responsible for the cooking of the Sausages on the BBQ (they were already cooked in the oven, just not browned) and she took her role seriously, turning the sausages and rotating them on the hotspot that had built itself up in one corner. After our Sausages were eaten, we toasted marshmallows and made messy smores that trailed down our chin, not that we cared, and even ate the mock forbidden treat of a toasted marshmallow between two Pringles.
Sitting together in the garden was great fun. We laughed and teased and enjoyed the last of the suns rays before it disappeared behind the houses on the other side of our street.
The night for us was just starting however and after clearing up the mess we'd made we settled ourselves on one of the airbeds that Top Ender and I had put up earlier in the day, or in my case, the pile of cushions from the garden chairs, wrapped ourselves in fluffy blankets and settled down to watch a film together. 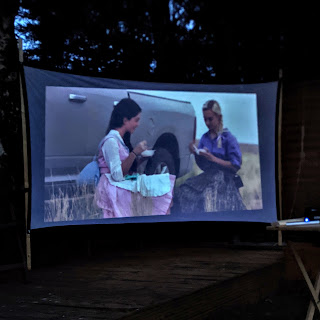 It was a couple of hours of magic and when the film eventually finished and we had to pack up in the dark, we didn't care because of the fun we'd had.
Family Life Film Free Days Out Holiday Lockdown Summer