- June 06, 2020
Another week over with. I've been back at work full time (well almost, I get an hour "off" every evening), I've walked to work every day and even managed to read a book, do some family history and yes I'm still suffering from a bad back so I haven't been able to do much gardening, but you can't have everything right? Doesn't matter though because my driveway still looks great! 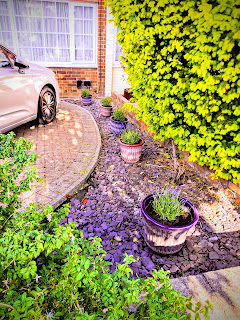 Here's what we're eating this week.

Top Ender really wanted a Cauliflower Cheese, I swear the child is trying to eat as much dairy as possible to either kill or cure her dairy intolerance! Well, jokes on her for two reasons. One I'm making her cook it and Two we're making it with her milk and cheese!
The good thing is that this is yet another meal that I'll be teaching Top Ender to make and yet another meal that she'll be able to make when I'm not about! Who knows, maybe she'll even be better at it than me and take over making it full time!

Flyfour said I should decide what we're having as a roast today. All I know is, it's going to be BIG because I can't make up my mind!

We didn't manage to get these the other day, which is stupid because I really like Salmon and Noodles and was really looking forward to it AND I shouldn't care if the rest of the family want to eat it or not! Still, it's okay because I'm excited to have it tonight instead.

Tuesday - Pasta of some sort!

I can't believe I published the post without mentioning what we were having tonight because, I think it'll be great. I've been dreaming of Chicken with slices of lemon on and garlic and all done in one pot (I have an instant pot that I still haven't used!) and so this will be the perfect opportunity to use it right?!
Wish me luck!

I was looking for some meal ideas and saw Potato soup and realised, that this is perfect. It's veggie for those that want it Veggie, It's dairy-free for those that want it dairy-free and it can be as filling as you want it to be with various toppings added to the top to make it as substantial as you want!
If it also tastes good, we'll probably have this again in the future.

I really do love a good meatloaf, I can't believe we've only been eating it for a few years as I'm sure this is the sort of meal my Mum would have loved making for my sister and I when we were children. Still, we know about it now and by having it tonight we'll be making it a meal that my children will have grown up on.
I might make it a bit different tonight though, I was thinking maybe some Rosemary and Garlic would be a good addition... Who knows until you try it though?!
Family Life Food Lockdown Main Meal Meal Plan