So here is my brief description of some of the children that were present at Top Enders School Nativity. If you want to take this time to regress back to when you were at school and in the School Nativity and you are sure that none of your fellow classmates was *one* of the following particular types then it was probably you.... 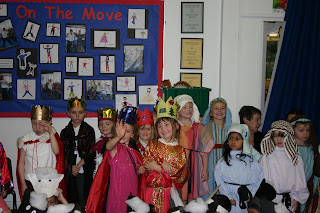 How many of the following types can you spot in this photo?

As the category type suggests they are the one with one finger digging away inside their nose. For some reason they are always in the front row of the Nativity and so you can't help but seem them. You can't help but be impressed with the depth they can get a finger into their little nostril, before finally it emerges with its treasure, which is either wiped on the child sitting next to them or eaten...

This is the one that if you aren't there parent you might miss as they are so busy trying to blend into the background, or into the Skirt of the nearest female teacher. Their parents insist that they aren't like it at home, and yet you get a good view of the top of their head dress for the entire nativity as they keep their eyes on the ground.

The Noisy Kid/Shout instead of Sing Child

You can't see them but you can hear them. They will sing all the songs at the top of their voice and sometimes even shout the lines of their classmates if they felt it wasn't said loudly enough the first time. You know this kids name because the teacher keeps hissing it at them. The child sometimes starts singing a different song to the rest of the class.

Not to be confused with the Shy child. This Child has been excited for the Nativity for as long as it has known there was going to be one. They are all ready to sing and to say their carefully practiced lines until they get up on the stage. They either cry or stand there looking like they are about to cry. The teacher is sometimes needed to hold their hand on stage to get them pass this point so they can either sing or say their line.

The I should of been... Child

This Child will be in the back row and will have the most powerful stare you have seen since Damien in The Omen. The stare will be directed at Mary or Joseph, or possibly the Donkey or the Lead Angel because that part should of been theirs! Careful not to look to long at this child because we all know what happen to the grown ups in The Omen.

The needs a wee Kid

At first you think this Child is just a normal fidget, but it is only as the Nativity goes on that you realise this Child needs a wee and needs it now. If the teachers are paying attention there won't be need for therapy in later years for this Child when the needs a wee Child becomes a need a cloth and new costume Child.

Normally an angel, this Child will have a costume that a parent has painstakingly spent hours, nay weeks making. There will be the usual tinsel around the neck of the dress, the Tinsel halo and huge painted cardboard wings and a smile that could light up the world if it was given at the right time. Jazz hands are optional.

The waving to Mummy Child

This Child might normally be quite shy and so Mummy and Daddy have invited everyone the Child knows to come to give them a confidence boost. The Child will beam at their Mummy or Daddy or Granny or Grandad or Auntie or Uncle or Next Door Neighbour or parent of their best friend or... yeah they wave to everyone in the audience who they have ever known. Greer Garson was this kid, and if you don't know why she is in the Guinness Book of Records go look her up.

Some children just have to express every thought that pops into their head. This child will chat the entire time to those around them, and the Teacher will keep looking at them with that Teacher "Stop Doing that" stare or will have told the other Children in rehearsal to ignore the Chatter box. It is because of this that they are easy to find, they are normally the Child sitting in the middle of a circle of children facing away from them.

The won't open my mouth Child

Front row centre this is the Child who isn't shy or overwhelmed, but has for some undisclosed reason decided that it is not going to sing or say any of its lines. If you are lucky you might get a begrudged sigh from them when their least favourite song is started to be sung.

The I know everybody lines Child

The class know it all. They may be some kind of child prodigy and instantly memorise anything that is said in front of them (just like all Children are when you swear by accident in front of them) or they might be the one Child who wants any part other than the one they have and so has learnt all the script just in case someone gets struck down by The Measles or really does break a leg and they can save the day.

The Teachers know that this child is going to be trouble from the start and so normally make them an Inn Keeper, as everybody knows the Inn Keeper gets the best laughs.In some productions they might announce there is room at the Inn, but normally they will be quite happy pulling faces and doing funny little actions to the amusement of those around them.

And of course then there is your child, who is just a perfect little Treasure and wouldn't do any of the above...but what I am interested in is which child were you?!
Christmas School