- December 17, 2009
A few months ago I was doing my usual blog hopping and came across a great blog called It's a Wonderful Life. I added it to my blog roll and it was a few weeks after, that I discovered Val was hosting a Secret Christmas Ornament Swap. After a couple of swapped emails about the possiblity of a British paticipation I signed up! 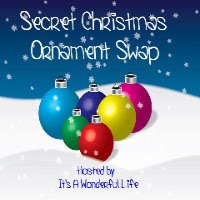 I sent my ornaments to the wonderful Pennie at Mom Thoughts which you can see in her post if you want to. I think that you can really hear the excitement in her post, plus I love the title of the post Yippee for Pippa!!!!

Anyway my ornaments came through in the post this week from a wonderful lady called Caitlin at Chaotic Creation (and she is getting married next October to her sweetheart Ryan so I want to say here that I wish them a long and happy life together because they look so cute together!) and wow were we impressed.

Top Ender and Baby Boy started working their way into the box and started pulling out packages before I even had the camera out of the case. I did manage to wrestle the ornaments from them for long enough to lay them out to get a few photos.

In this one you can see all the beautiful ornaments that Caitlin made, yes that is right *made*. 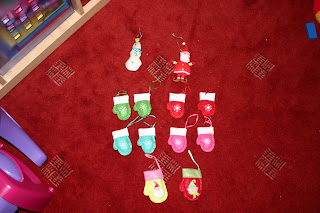 These two mittens have the adorable faces of a Santa and an Elf, who Top Ender has decided to call Alfie. Alfie is apparently in charge of Santas sleigh. I thought that was Dudley Moore's Patch, but apparently my great knowledge of Christmas films means nothing to Top Ender. 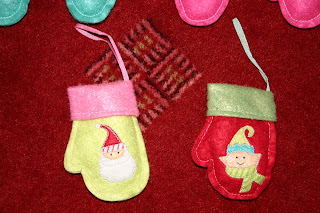 Top ender also decided that each set of mittens were designed for a specific family member, she believes that Green are for Daddy, Red are for me, Blue are for Baby Boy and the Pink are for her. I think she is probably right. What gets me about these mittens is that each set has a different snowflake on them and I totally didn't notice that at first! 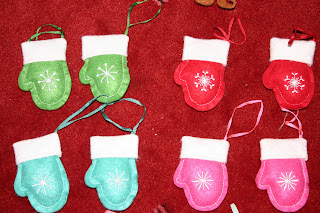 Then of course there was this adorable Snowman and Santa, I love the snowmans scarf and hat and Santa's shoes with the curly toes they both look so cute! 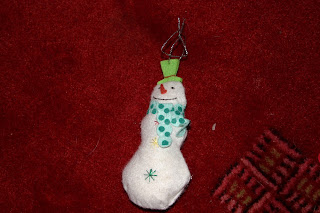 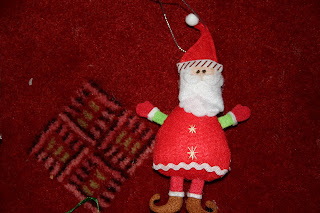 Lastly there were these adorable pink and purple glittery snowflakes of which I got four of each colour, but they have all mysteriously gone missing... or at least I thought they had until I went into Top Enders room and actually paid attention to her little tree, from which I borrowed two ornaments so I could take a picture of them! 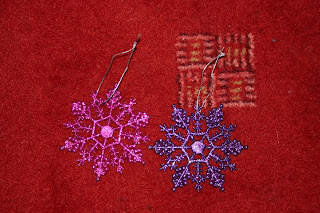 Part of the challenge that Val issued to us was to visit the blog of our partner and to get to know them, so that we could chose an ornament (or ornaments) that we felt would be suitable for them. So I would like to thank Caitlin for my beautiful ornaments because they really do fit our family perfectly!

Edit: I just found out that these were all store brought and not home made... I don't care, nobody over here has any the same as me so I shall say there were custom made for me!
Christmas Family Life