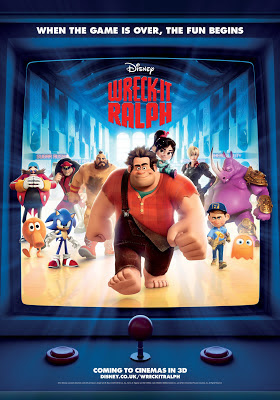 Last Friday night we were very lucky to have been invited to watch Wreck-It Ralph at Disneyland Paris. We were so pleased to have been invited as we have been eagerly waiting for the film to be released here in the UK since we saw the trailer before Brave. If you haven't yet seen the trailer, take a look. I promise you it's worth the two minutes and twenty seconds.

The storyline for the film is quite a sweet one, it's about Ralph (voiced by John C. Reilly) a "bad guy" from an arcade game called Fix It Felix Jr, who has been the bad guy day in, day out for the last thirty years and has become disenchanted with his life. He wants something more and he knows that in order to do it he is going to have to stop being bad.

Ralph goes rogue and tries to be a hero in other games that he has access to via the Game Central Station (a multi socket extension cord), but the problem is he was coded to destroy things, not to be the hero.

On his quest to be the good guy he meets Sergeant Calhoun (voiced by Jane Lynch) who has a tragic back story, sweet but feisty Vanellope von Schweetz, and of course we get to see some of our favourite game characters from popular games such as Sonic the Hedgehog!

Whilst Ralph is away from his game having "gone Turbo" as the other characters call it, the arcade manager believes that the game is broken and if it can't be repaired will turn the machine off, meaning all the inhabitants of the Fix It Felix Jr game will be homeless! Felix (voiced by Jack McBrayer) sets off to find Ralph and bring him home and he too finds himself in worlds that he wasn't programmed for.

The characters have to work together when a deadly enemy threatens all the games and we find out that sometimes if you are brave you can save what matters most to you.

The film is brilliant, there is no other word for it. The story is complicated enough that you can't guess all the plot twists, but easy enough to follow that even four year old Big Boy declared the film to be the best he's seen. Top Ender loved the strong female characters in the film and the first question she wanted to ask producer Clark Spencer when we met him (he's such a nice chap) was "When is the sequel coming out?", which I was rather eager to know too.

There are so many gamer references and jokes that this film will stand up to repeated viewing and I know that when it comes out on DVD we will be among the first to buy it (I'm starting to save now!) and even then I'm sure that we didn't pick up on everything.

The 3D feels very natural, in fact I actually forgot at one point that it was in 3D despite wearing the requisite glasses! The film is also very beautiful, you can tell that those who have created the film have thought everything through, down to the very last detail (such as basing the world of Candy Rush on Circles, the world of Fix It Felix Jr on Squares and the world of Heroes Duty on Triangles) to make the different worlds we see feel true to their arcade roots and Clark Spencer explained some of the processes they went through, including inventing some new technology and processes to make the Candy Rush world look as tasty as it does!

All of my family enjoyed the film, understood the film and were eager to watch it again, which I have promised them we will do in February Half Term when it comes out here in the UK. It did provide me with a lot of inspiration for our Special Friday Lunch this week, so make sure you pop back tomorrow to see just what I mean and if you are still eager to find out more about the film, check out the Facebook page where there are some behind the scenes tidbits of information and early character sketches amongst other images.

Disney kindly paid for us to visit Disneyland Paris so we could see the film ahead of it's European release.