- November 16, 2012
If you follow me on Twitter or know me on Facebook then you can't have missed that last weekend I was in Disneyland Paris with some lovely other bloggers to see Wreck It Ralph, which is out here in the UK in time for February half term (read my review of the film now so you can get really excited for it!). We loved the film so much that I had to swap around a few of my lunches in order to make a Wreck It Ralph Friday Lunch for Top Ender and Big Boy and I thought you'd love to know how I did it.

Let's start with the pudding, because who doesn't want to start a meal with pudding?!

If you've seen the Wreck It Ralph trailer you will know that Ralph is seen eating a Cherry. I thought, wouldn't it be cool to make a Cherry Cake Pop? So I did. Making Cake Pops is surprisingly easy, all you have to do is make a cake, crumble it up and mix in some butter cream icing until you have a dough like substance and then roll it into balls. Now comes the hard part. You then have to dip the top half of your ball into melted Chocolate and then let using a spoon drizzle a thin layer over the bottom half before letting it set and dipping again to get an even and smooth covering all over the ball. When this doesn't work you will get frustrated and I'm sure if you work more slowly that you'd get a better and more even end result than I did. 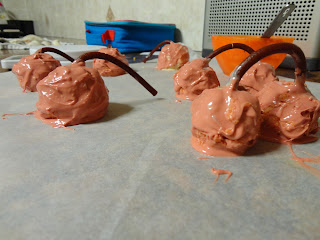 The cherry stems are strawberry Fruit Bowl Peelers, which I thought made the cherry cake pops look more like the ones Ralph has in the film and of course it helps add into the five a day that we should all be eating as a minimum on a daily basis. 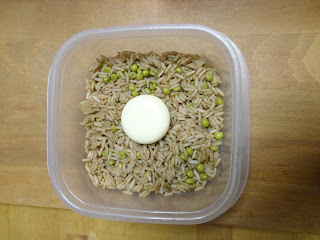 The main part of the meal is rice that has been cooked in a Beef Bisto Stock Melts, to give the rice some flavour and also I wanted it to be coloured so that it would look like mud that Ralph falls into when he is "defeated" in Fix It Felix Jr (the computer game he lives in). The Green Peas are supposed to represent Sour Bill, a character in Sugar Rush (one of the worlds/games that Ralph goes to) and the Cheese is the all important medal that winners of all the arcade games Ralph takes part in receive when they win. 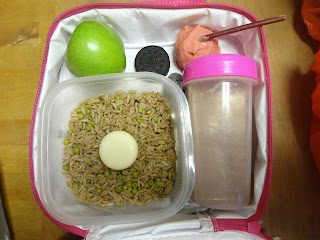 The drink is a Chocolate Milkshake, as it along with Coke feature in the Candy Rush world, and we thought it was rather cool to bring in yet another link to the film. And the Oreo? Well. Oreo's have a rather fun line in the film and who doesn't like an Oreo?!

So there you have it, a Wreck It Ralph themed Friday Lunch.