- November 08, 2012
Over the last few weeks Top Ender and Big Boy have been so loving towards each other that I've had to check a few times that whilst I'm in the kitchen preparing dinner that they haven't actually knocked each other out and that is why there is near silence in the living room. Gone are the fights over what they are going to be playing on the Xbox, gone are the temper tantrums when one of them chooses a game that the other didn't want to play and instead they are playing together. Nicely. Helping each other and generally being the great kids that they appear to be in all my other blog posts! It turns out that the copy of the game Madagascar 3 - Europe's Most Wanted for the Xbox has transformed my children into gamers who share... 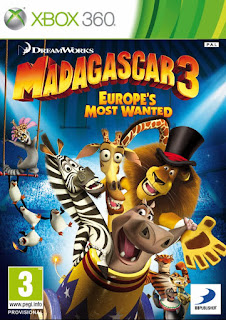 Now I haven't actually got a look in on the game, but having watched Big Boy (aged 4) and Top Ender (8) play the game in Story Mode I can tell that it is easy enough for them to understand and to be able to work out that each of the different characters have different strengths to perform different tasks, (The fact that when the characters get stuck and tell you they need another character also helps but hey lets let the kids think they worked this one out themselves!).

The children are slowly working their way through the game and have even played Circus Mode with Daddy which is more about playing different games than working their way through different levels. All in all I think that they will finish the game some time this month, with no adult intervention and I think that's a great thing. I mean wouldn't you love just for once not to hear;

just once when the children were playing a computer game? I now not hearing it is music to my ears!

I've read a few reviews of the game where people are saying that it is very simple and for children, well of course it is it's rated as PEGI 3 which means it's suitable for all ages and I think it's especially good for younger children like BB.

And just so I'm not the only one who keeps singing Afro Circus every time they hear Madagascar 3...


We were sent a copy of the game to review.