- September 28, 2013
It's official. I have to give Big Boy low carb meals in the evenings otherwise it's throwing his sugars up too high, making him crash in the middle of the night (which then causes him to be high in the morning and you know it starts again) and it's just not fair on him, on his body and it can cause bigger issues in the future. Soooooo. 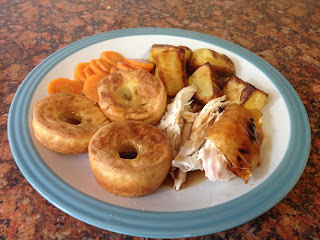 
Big Boy is at a party in the afternoon, so we're expecting issues in the evening with his blood sugars anyway but we're going to have Chicken Drumsticks with Salad. The Chicken is no carbs as it's all protein (I'm going to roast or possibly grill them) and the parts of the salad that BB will eat combined with the amount that he'll eat adds up to a whole 2 or 3 grams.


I've been trying to think how I can make the meal low carb and have been struggling. In the end I realised that what I need to do is reduce the portion size! Big Boy will eat nearly carb free for the rest of the day so when his Roast comes to 35g of carbs, we should breathe a sigh of relief.


I'm going to steam some cauliflower, mix it up with some sliced Hot Dogs and sprinkle cheese on top. I figure the children will be bribed into eating the cauliflower with the sprinkled cheese and the mixed in hot dogs. This should be around 6 or 7 grams of carbs.

I'll make up some low sugar jelly for pudding and cross my fingers that the Children eat!


Big Boy and Top Ender are having friends round for tea tonight and so we're breaking our new low carb meal plan... but this time only okay?! Birdseye have given us some vouchers to try the new Chicken Space Shapes, so we thought we'd have some friends round and make a party of it!

I was talking with one of the little girls after School one night last week and she said that she doesn't like green peas, but she does like orange ones. Luckily her one was able to work out she meant Baked Beans!


I'm going to get some Salmon, I'm going to bake it in the oven with a little lemon, a little bit of seasoning and serve it with carrots and peas. This should be around 7g of carbs.

Thursday - Lasagne. Without the Pasta


I'm going to make what I want to call an Italian Casserole. I'm going to basically combine the mince, tomatoes, mushrooms, onions and top it with a cheesy creamy thing and bake in the oven until it's cooked. This should work out as about 5g of carbs.


It's an easy meal this Friday, mainly because I'll be exhausted as I'm running around the place this week and hoping to get some bits and pieces sorted before the WEEKEND! Still, I'm sure we'll enjoy our meal, which will have sweetcorn smuggled in!


So pretend you are on a low carb diet, what would you be making?
Diabetes Food Meal Plan