What's Better? Reading Comics Or Not Reading At All? #Review

- September 19, 2013
This week Big Boy has been being a bit of a rebel when he's at home with me, you see Big Boy has stopped enjoying reading and has claimed that he no longer wants to read or learn to read either. To a book work like me that is terrible news, I couldn't imagine my childhood without the constant companions I found in books and worse because I was such a book worm I have no idea on how to get BB to enjoy reading.

In School he's been fine. He hasn't denied requests to read, he hasn't mentioned that he doesn't want to read and he's showing enthusiasm for reading in group and one on one settings. This isn't good enough for me though, I want Big Boy to enjoy being read to, to enjoy reading and to want to do it at home too. I spoke with my friends on the School playground, I read articles on the internet, I spoke with BB's teachers and out of the many suggestions that they came up with the one I thought would work best for us would be giving Big Boy comics to read.

We were actually sent the new DC Super Friends Comic aimed at young children (yes the promotional information says boys, but the comic can be for girls too, don't get caught up in the sexism of it) and I thought this would be a good comic for Big Boy to start reading, as like his friends he's very into Super Heroes. 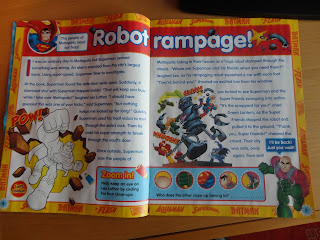 Big Boy has read this comic and and instead of just listening to the stories I'm reading him and Top Ender he's picking out words and reading them too. He purposely sat down this afternoon to read some more of his comic and he's asked if we can read some other stories together too. I guess that reading comics is like a gateway drug to reading books and I'm willing to work with that.

The DC Super Friends Comic is out today (19th September 2013) and is aimed at children aged between 2 and 5 and can be found in Supermarkets and Newsagents.

We were sent the comic to review.
Magazine Review