- September 20, 2013
We're almost half way through the Organic Naturally Different Challenge, that the Foodies 100, and BLAH set me. I have another delivery of food coming ready for meals this weekend and looking at the items coming has me thinking about why it is that I don't buy organic on a more regular basis. As Sally pointed out in the comments of my admission post, that I don't normally use Organic products, if you look at the prices they are really like for like.

The meals this week, were normal meals. 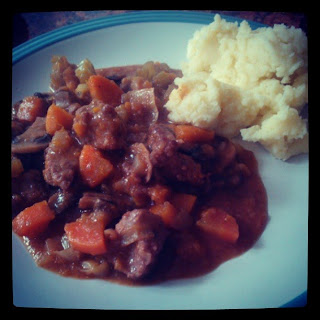 What I mean is, if I'd thought of buying these ingredients and making these meals then this is what I would have cooked. These are normal meals, for a normal family and nothing special about them... apart from almost everything was Organic. It's led on to playground discussions about what we eat, how we eat and what we do and don't buy that's organic. I guess a lot of people are actually like me, and don't know what questions to ask about their food, where it comes from and how it is produced to know what the point is of buying organic.

Like we were always told at School though, if you have a question raise your hand and ask it, as there is always going to be someone else who also wants the same question answered. So for the sake of everyone else who doesn't want to raise their hand to ask what they think is a daft question, here we go. I'm raising my hand and then researching on the Internet!

So what is Organic exactly?

From what I've read Organic food is basically any food product that is grown in organically certified land without the use of any chemical treatments. That's from fertilizers and from pesticides. Therefore anything put onto the plants, or the ground is from a natural source.

What can I buy Organic?

A quick look at the shopping I've had delivered over the last couple of weeks, and through the supermarket shelves has shown me that almost EVERYTHING can be brought as an Organic product. I've even found organic make up and clothes...

What are the benefits of buying Organic products?

Well, this is where people start to differ.

I could say, as several people have, that it's about the taste benefits, and I must admit the organic meat we've eaten did taste really nice, but others say there is no taste difference and that there are no additional nutritional benefits.

According to research, there aren't extra nutrients or vitamins in the organic food, but what there is with the organic foods is a lack of pesticides and reserachers did find that there were higher levels of omega-3 fatty acids in organic milk and chicken.

Well, this is my humble opinion, but I think the best way is to simply start with buying fruit and vegetables with the organic label. Yes, there can be an additional cost (I'll cover that in a minute) but if you are buying in season then you'll find the cost slightly lower!

Of course you could also try swapping one or two items a week from non organic to organic or even slowly restocking your pantry with organic items.

After my two week full immersion into the world or organic produce, I've already re-written the way I spend my budget to ensure that I can buy organic meat, fruit and vegetables (I'll work on the rest later) and as long as I remember to plan my meals around seasonal foods and using up leftovers I shouldn't spend that much more than I do currently.

Why do more people not already buy Organic?

Again, this is my humble opinion, but I think that it's mainly cost and secondly lack of knowledge. When you're in the Supermarket comparing the prices of two packs of Cherries (for example) you're after the best price. And if the two packs look identical, you're going to go for the cheaper price, but they aren't identical products and that's the key.

After some research, now that I know what goes into growing the fruit and vegetables and rearing the animals I understand why it's slightly more expensive and also why if more people chose organic produce the prices would most likely come down.

Why is Organic more expensive?

It's partly supply and demand as I touched on above, it's also partly that it costs more to produce in some cases.

What stops Farmers saying their food is Organic when it isn't?

Here in the UK, I found that DEFRA and the other control bodies ensure that all the standards of the producers claiming to produce organic products are met. They are inspected at least annually, but can have spot inspections to make sure they are complying fully all the time AND they have a license too, which will show on the label of the product.

So, that's what I found out. I hope you found it as useful as me and if you have any other questions, you can either ask me in the comments and I'll try to find out or you can ask the Organic UK Food team on Twitter or Facebook who I'm sure will be pleased to help!

As I've explained in a couple of posts, I was supplied with organic produce for two weeks to make meals from.
Family Life Food