- September 07, 2013
So as I said yesterday this week we're working with mainly organic ingredients, I wasn't sure exactly what I should make, especially as part of the challenge is to make proper recipes and to try to stretch the food as far as possible.

In the end I started with the dish I knew we had to have, every Sunday we have a roast and so I have to do the Chicken for that and then I worked out the rest of the week around that and what we were doing with regards to after school clubs, working late and the like. 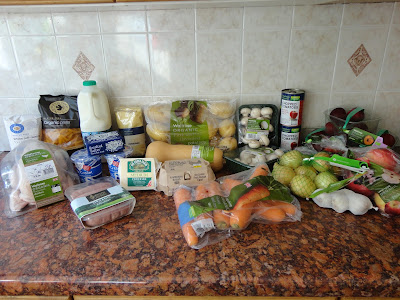 
We're out today in London with the lovely folks at Vosene, so I'll throw some Potato Soup into the slow cooker and we can eat that when we are back from all the other things we do. The one thing I will add to it, is some Bacon which I purposefully went and got from the Organic Butchers in one of the villages on the outskirts of Milton Keynes.

Peel and dice 5 large potatoes, one onion and 5 sticks of celery.

Add the diced vegetables to 2 pints of milk, with a little salt and pepper and then cook on low until we're ready to eat it about 6 or 7 hours later.

I'll then grill some bacon and cup into little fiddly bits to sprinkle on top of the soup with grated cheese.


There will be some leftover which I'll have for my lunch this week/ as a snack when I'm starving.


For the Roast we'll use the potatoes (for roast potatoes) the egg, milk and flour to make Yorkshire Puddings, the carrots for some veggies and an onion with the Chicken to make the Roast Chicken!

I'll make a Plum Clafoutis for pudding to use up some Plums!


The garlic mushrooms are more for Daddy and I than the children and I'll only make onion rings if I can make Daddy's batter as thick as he does other wise the onions end up as some sort of gloopy gluten free mess!

This is a good meal to have for a nice Meatless Monday, with poached apples or plums as a pudding or maybe some leftover Clafoutis.

Top Ender is also off to Brownies tonight, so wish her luck!


I do love a Chicken and Mushroom Pie and whilst the children might not agree (they aren't Mushroom fans) I'm sure my plan for mash with a twist to go with it will have them asking for this more often.


So what haven't we used up yet? The Butternut Squash, the Chicken carcass (which I will have already turned into Stock and frozen) sausages, an egg, a few carrots, two can of tomatoes, some cream, some cheddar cheese, a pack of coucous, the pasta and the apples.

There are technically plums left, but as they will be going out date quite quickly I'll prepare them for pies and jams and cakes at the start of the week and make them ready during the week, keep an eye out on Instagram for pictures of the various pies and cakes etc.

Right. In that case lets move on to the rest of the week.


The sausages unfortunately aren't gluten free, and so whilst Daddy is travelling home from work today the children and I will have Sausage Meatballs and Pasta. It's easy to do you just snip open the skin of the sausage, turn the sausage meat into balls and gently fry with some onion, some canned tomatoes and hopefully I'll have a can of beans in the cupboard to bulk it out.

Served with Pasta and some sneakily added herbs the children won't know this isn't their usual favourite dish and I'll get some gluten free sausages to make meatballs for Daddy.


I made Butternut soup before and it's lovely, this time though I'll add half a can of tomatoes (the rest is for tomorrow) and after I've served the children I'll add in some Harrisa paste with some cream for Daddy and I. 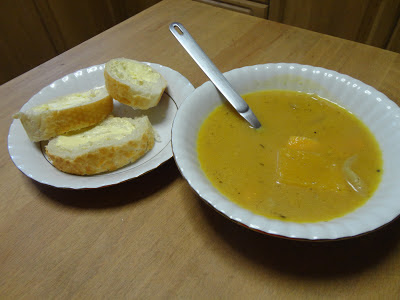 
The couscous isn't gluten free because it's basically made of wheat so with the sausages and an onion and some bits of carrot and butternut squash, the leftover tomatoes and some of the Chicken Stock, I'll make a tasty mix of ingredients for the children and I.

I reserve some of the vegetables to one side, use some of the gluten free sausages from Wednesday and add to the left over pasta for Daddy to eat when he gets home.


I'm not sure I'll have enough potatoes to last the week, so I may have to get some more (unless I have some in the house already) and the apples will be featuring in something somewhere.... I hope!

The food we are eating this week (in the top picture) was sent to us so I could talk about Organic produce.
Main Meal Meal Plan Recipe