- November 21, 2013
Whilst we were in Tesco's, doing the weekly shop I noticed that someone had dropped their Clubcard, as they had left the checkouts. I suggested to Top Ender that she should pick it up and return it to the customer Service Desk. Top Ender did this, and handing it over to the lady manning the lottery counter (the Customer Service Desk was busy) said she had found this persons card. The lady behind the counter read the name on the card out loud, and it just happened to be the next person in the queues card. 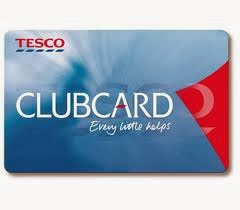 The chap was really grateful that Top Ender had taken the time to return his card, and he reached into his wallet to reward her. Top Ender declined the monetary reward, but he offered it again and again she declined. Finally after three attempts of offering it to her, he understood that she didn't want a reward, she was just happy that the card had been returned to the owner. Top Ender said if he really felt that he should give a reward that he should consider donating the money to Charity pointing at the Diabetes UK collection tin on the Tesco counter and smiled at him as she turned to catch back up with her Gran and me.

As we walked out the store, Top Ender asked why the man had tried to insist that she have a reward. To nine year old Top Ender, just doing the right thing was the reward and she didn't really understand why the man felt he had to reward her. And this is what has been bothering me over the last few days. When did doing good become something that people did because they would get a reward? When did doing good for good's sake stop?

Combined with Top Ender making her Brownie Promise earlier this week, and promising to do one good deed a day I thought that I should make a stand and I'm doing that here and now and I'd rather like you all to join me.

I vow that I'm going to do daily good for good's sake.


I'm not doing it because I want to be recognised as someone that does good, I don't want to do it because I think that it will make me a good person, I'm not doing it because it's about time that we took control of the world again and made it a better place. A place where if a wallet or clubcard is dropped or a pet goes missing we don't expect a reward for getting it safely back to the right owner.

I want to live in the sort of world, where a stranger would do something good just because they can. Who's with me?
Family Life