- August 27, 2017
I'm a bit late in posting what we're having for our meals this week as Top Ender and I have been rather busy having fun together on our Staycation. We weren't able to do quite as much as Dan Jon and I did, but it didn't matter because we did the important things that Top Ender wanted to do.

It was a brilliant Staycation. 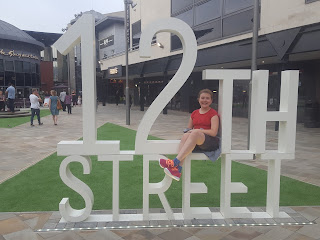 Top Ender and I decided last night that instead of having a proper evening meal we'd have a treat and so decided to go to the desert bar in Milton Keynes called Kaspa's. It was AMAZING! Top Ender went for a Crepe and I went for a Waffle and we know we're be heading back soon.


Top Ender decided that she would make Cowboy Casserole for our family to share when Dan Jon and Flyfour got back from their camping trip. It doesn't take long in the slow cooker and is so easy to make that I'm quite happy for her to make it!


Top Ender has vanished off to Disneyland Paris with her Guides for a few days, so the rest of us are at home. I thought that we'd have something special for our meal tonight, we just have to go to the supermarket and buy it first, or we might just go to Kaspa's!


We're having another carb free night tonight just to check out Dan Jon's sugar levels following changes that were made last week. We really enjoyed these when we had them a few weeks back, so we're going to have them again tonight.


I figure after the last couple of nights we need something good and healthy tonight! Dan Jon isn't aware yet, but he's going to help me make it! It is such a simple dish, so I'm not sure he'll be that bothered about helping.


Something nice and simple tonight!


Well for everyone apart from Flyfour it's Sausage Pie! Top Ender and I were going to have it on our Staycation, but we ended up going to Kaspa's instead. I said we'd have it tonight as something for her to look forward to instead of being depressed she was leaving Disneyland Paris!