- August 05, 2017
Food glorious food! Dan Jon, Flyfour and I loved the meals we had last week because they were fun meals and so I'm hoping to recreate that in part this week now that Top Ender is back from Camp and before the children all run off to camp with their Dad over the next couple of weeks and Top Ender goes off to Disney Land Paris!

Here's what we're eating this week. 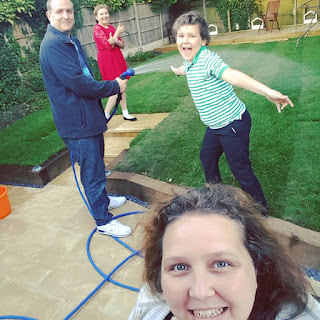 After we ate out at GBK last week, we realised that we love burgers. We also realised that when we used to have our Saturday Sandwiches for lunch (I'm not sure if I ever blogged about this, but each Saturday we'd recreate a sandwich from a TV Show we were watching and we got some amazing sandwiches) we were doing similar to what we did when we all ordered our favourite toppings on our burgers at GBK.

So we decided that we'd do it again and with burgers that we'd make at home and hopefully we'll come up with some great combinations. Watch out on my instagram feed for hopefully some yummy looking burgers!


As it's the first Sunday of the month, Top Ender and I will be fasting and will be starving come time for our evening meal, so we'll be glad that we have the full works of Roasties, Yorkshire Puddings, Vegetables, Stuffing, Gravy and whatever else Flyfour can squeeze on to the plate!


I was looking up camping recipes last week and found a one pot recipe for veggie sausages and pasta and so figured it would be great tonight. I know that Quorn do veggie sausages that are also Gluten free, so it'll be wonderful for the whole family to eat together.

I'm not going to cook it on a campfire though, and I'll probably end up doing it on the stove because I'll forget that I'm supposed to be doing it in the slow cooker.


I thought that Flyfour and I might appreciate something a little bit more grown up this evening and so some citrus fish was what I put onto the menu, but Dan Jon let me know he wasn't looking forward to that, so I thought I'd change it a little and make a Fish Pie with a citrus white sauce.

I'm going to serve it with a simple salad and some potatoes, but I have no idea how I'm preparing them yet as the top of the fish pie is obviously made with potatoes and nobody wants to overdose on potatoes!


We have a love of BBQ here, and well carbs.

I'm going to shred some chicken breasts and mix it some red onion and and cheese and barbecue sauce and stuff it in to hollowed out bread rolls, before heating them through and serving. I'm really looking forward to this one.


Either Meatballs, Lollipops, Shredded or with Cheese and Apple Sauce. One of them is what we're having tonight, I just haven't decided!


I really wanted to make a kebab for our family tonight and we have a brilliant recipe for a home made Doner Kebab but I didn't want a Doner Kebab, I wanted a chicken one!

So I'm making it up as I go along and hopefully making a Kebab that tastes as great as Flyfour's favourite Kebab shop.


So that's what we're having this week, how about you?
Family Life Food Main Meal Meal Plan