- September 01, 2010
We were given a free sample, but don't not read this post just because of that; We don't let free things change our opinions!

A few weeks back Daddy and Top Ender decided that it was time to buy some Lego. Whilst Daddy was busy filling up a large tub from our local Lego store I took Top Ender further into the store to where the really good bits were - the Minifigures! Today a new series of the Lego Minifigures is released and here is the full line up.

As you can see there is a wide range, with a Popstar (back row second from the left), a Vampire (front row third from the left) and lots of others! We were lucky enough to be sent three packets and I think that I was more excited than both Top Ender and Baby Boy! 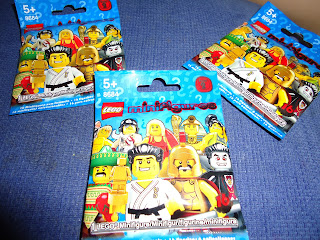 We eagerly ripped open the first package and put together a Weight Lifter who we called Bruce (You know like The Hulk) and he was a little scary looking and I don't think he liked me taking his photo... 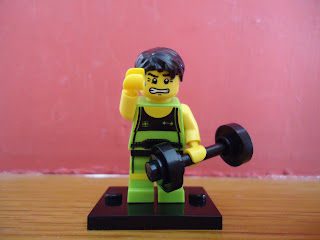 Then we opened the second package and inside was a Traffic Cop who we called Joey (He reminds me of Joey from Friends, look he is saying "How you doin'?") and he didn't slap the cuffs on me but I could tell he wanted to! 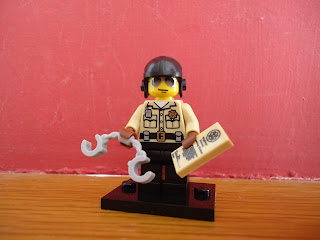 And the third package that we opened a very nice Explorer popped out and told us to call him Captain. I was a bit worried that he was hunting for wild animals, but he said that the only thing he was looking for was a decent cheese toastie. 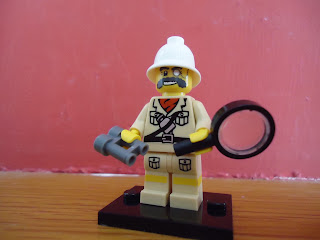 Top Ender is loving playing with her three new Minifigures, and at £1.99 a packet from major retailers such as Argos, Tesco, WH Smith, John Lewis, Smyths and Toys R Us they are soon going to be being swapped at school until we have the full set!
Toys