The Robinsons Search For A Star Auditions!

- September 28, 2010
So if you were following my tweets on Sunday you will know that I was able to sneak into the Robinsons Search For A Star Children's Chorus Auditions at The Milton Keynes Theatre, as a member of the press. You will also know that Top Ender was auditioning, as I had previously mentioned in my blog post about when Top Ender and I met Joanna Page!

The last time I had been doing something similar to this, it was when I had auditioned as part of a school choir to be part of the Children's choir in Joseph and The Amazing Technicolour Dreamcoat. It brought back a lot of memories and the similar mixture of nerves, excitement and breakfast.
﻿

The whole event was amazing, there were 400 kids between the ages of 6 and 16 and they were all there auditioning to be in this years Panto (which is Dick Whittington Book your tickets now folks!) and there were children not just from Milton Keynes, but from the surrounding towns and villages too.

Top Ender left me (as parents weren't allowed in), and as soon as she was in the auditorium she was handed a Robinsons Search for A Star T-Shirt and took a seat waiting for the rest of the children auditioning to filter through the registration desks. I waited until the children were seated before sneaking in, and was there ready for the Head Choreographer to welcome the children and to explain what the format of the day was going to be. 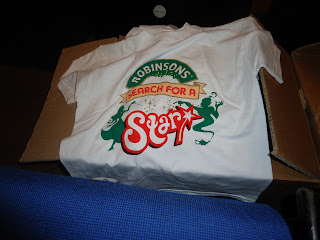 When the younger/shortest children went up on to stage in groups, Top Ender saw me as she walked passed in front of where I was sitting. A cheeky grin and a sneaky wave were sent in my direction before Top Ender put her mind to the task at hand... learning the dance routine.

It has been well documented that Top Ender has the memory to rival a goldfish, and so I was a little worried about how she was going to learn a dance routine but I need not of worried. The routine was split into manageable sections and repeated time, when the new parts were added. I sat with my jaw getting closer and closer to the floor as each child on the stage not only learnt the routine, but did it with such professionalism!

I did see the dance a fair few times, and would like to show you my video of me performing the dance with Top Ender, but with auditions at Wimbledon still to take place, it might be unfair for some children to see my oh so professional performance and to learn the routine before officially being taught so I will post it after Sunday just to make sure there is no cheating! 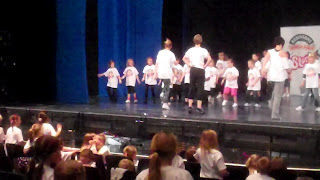 The choreographers knew what they were looking out for and slowly I could see which children I thought would be chosen to be part of the cast of Dick Whittington. There were a few obvious dance school students with smiles pasted on to their face as they tried to keep eye contact with the choreographers on stage (and me as some seemed to think I was a judge; I felt like Simon Cowell!) and some with natural talent like Billie who at 11 already has a career in mind (Director, but she will work her way up with acting work first) and I believe that in a few years we will see some brilliant works from her!

Slowly the choreographers worked the 400 children down to the 24 successful ones and unfortunately Top Ender wasn't chosen. The Head Choreographer made sure that every child knew that their efforts had been appreciate and told all the children that her job hadn't been easy, although I know there must of been a lot of broken hearts I didn't see one child leave upset.
﻿
It was a truly positive and upbeat day and I can't wait to see the panto having seen the children's chorus audition!
Family Life