A Trip to the Local Fire Station

- September 13, 2010
At the weekend we went to our local Fire Station Open Day. They have it every year at around the same time (as my blog post in August 2009 proves!) and despite having lived less than ten minutes by car away for the last ten years I had never been before. In fact the closest I have been to the inside of a Fire Station is when playing with the Fireman Sam Fire Station! 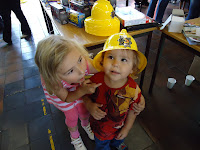 We had a good look round the station and at the engines and equipment trucks that were on show for the afternoon and we even saw a real emergency call take place and saw all the on duty firemen run to an engine when an alarm came in for some bushes that were on fire nearby. We were once told that fires such as these on the open day are a regular occurrence as some bright spark always has a smart idea of trying to cause chaos when the Fire Fighters are showing people what they do and raising awareness.

Baby Boy loved it and didn't shout "FIRE" once for fear of being branded a Naughty Norman, and even Top Ender had fun looking at the equipment and having a go on the fairground rides. Both Top Ender and Baby Boy had a go at putting out a fire with a real fire hose, although Top Ender got it put out so quickly that I didn't even get the camera on before she had put down the hose!

The part of the afternoon that really made me realise how lucky I was earlier this year when I had a small fire in my kitchen (I blogged about it earlier this year How Fireman Sam saved my life) was the demonstration that they put on for us about why you shouldn't pour water on a chip pan fire. Remember people flaming oil and water do not mix!


The afternoon out gave us a perfect opportunity to talk about fire safety at home and what to do if there was a fire (as I had done before with Top Ender as recorded in Operator there's a polar bear in the garden!) and we have gone over our emergency escape plans.

Please make sure that your plans are up to date too!
Family Life Free Days Out