- December 13, 2010
I thought that I had blogged about these before, but I couldn't find them anywhere! During the autumn a couple of years back Top Ender collected a number of pine cones. She was going through a real scavenger phase and everything that she brought had to be kept. I still have a couple of jars of conkers! I decided that if we had to keep them then they might as well look festive and so one afternoon Top Ender and I set about making the pine cones glittery. 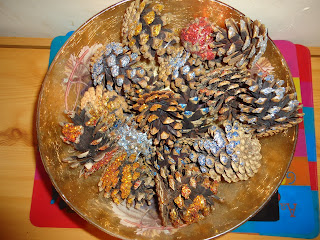 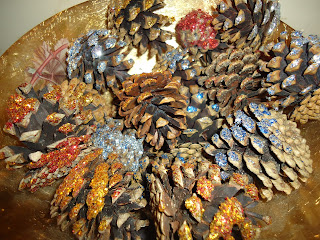 The glittery pine cones have lasted well, as they are constantly on display on the dining table and Baby Boy has a thing about arranging them in different orders. Thinking on it a few of them could probably do with being replaced... just don't tell Top Ender I said that!
Autumn Craft